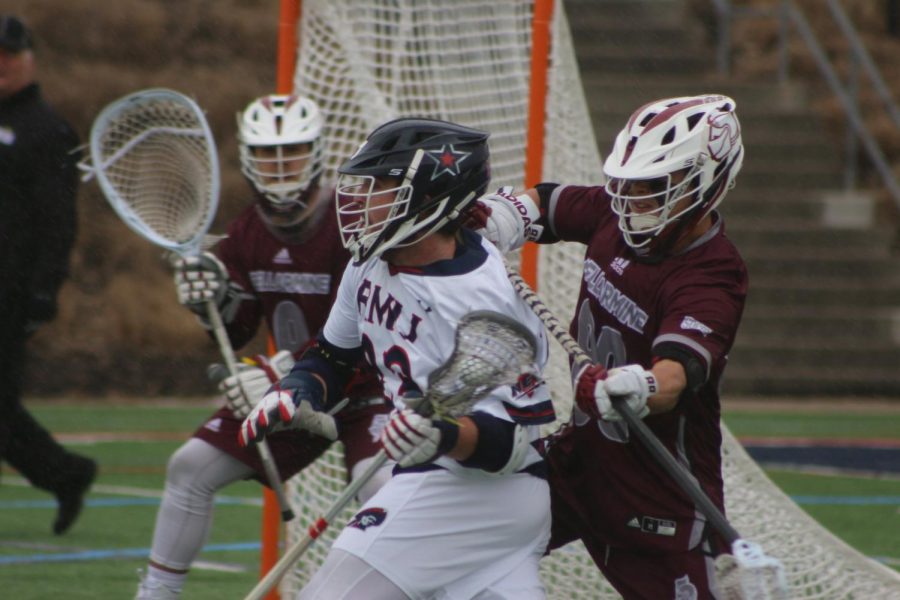 MOON TOWNSHIP — RMU men’s lacrosse (1-6, 0-1 NEC) continues Northeast Conference play on Saturday when they return to Joe Walton Stadium to host the Mount St. Mary’s Mountaineers (4-5, 1-0 NEC) in the conference home opener after losing against the Sacred Heart University Pioneers (5-3, 1-0 NEC) in the first conference game of the season.

Robert Morris began the start of the most important stretch of the 2019 men’s lacrosse season, but the team has fallen short of expectations this year after going a disappointing 1-5 in non-conference play and losing the conference opener last weekend to open NEC play with a record of 0-1.

Looking at RMU’s last game against Sacred Heart, Corson Kealey and Ryan Smith each helped anchor the Robert Morris offense to a strong outing, but it ultimately fell short for the Colonials. Kealey scored six goals for RMU and Smith scored four goals for the Colonials as well. Robert Morris’ lead went away at the start of the third quarter when SHU’s Alex Weiss scored to take a 7-6 lead and Sacred Heart held onto the lead after that point.

Taking a turn towards Mount St. Mary’s, the Mountaineers are coming off a 10-7 win over the Bryant University Bulldogs (2-6, 0-1 NEC) last Saturday. The Mountaineers started the 2019 season off by losing four consecutive contests to open the year. Two of the contests that Mount St. Mary’s faced in non-conference play were nationally ranked opponents, the ranked opponents were no. 10 Towson and no. 20 Georgetown.

When Bryant came for MSM, Chris DiPretoro, Luke Frankeny and Sam Stephan each managed to score two goals for Mount St. Mary’s while the remaining goals from MSM came from Joe Bethke, Brendan Doyle, Jack Mangan and Brendan McCarthy. DiPretoro, Frankeny and Stephan helped anchor and lead the rest of the team while Bethke, Doyle, Mangan and McCarthy came in to fill in the holes to supplement the trio to help MSM to the win over Bryant.

Corson Kealey (RMU): Kealey is on this list since he helped the Colonials out on Saturday with a big breakout performance. Kealey’s six goals is a season-high for him. Kealey’s previous season high was on March 2 when the Robert Morris squad traveled to North Carolina to play High Point University. Kealey scored his previous season-high with five goals during that game. If Kealey is able to deliver another strong performance like he did against Sacred Heart, he can make a positive impact for the team in its hopes for another run towards the NCAA tournament.

Ryan Smith (RMU): Smith helped Kealey out last Saturday in Robert Morris’ loss to SHU by scoring four Colonial goals. Smith has put up strong individual numbers for RMU this season as he has scored 15 goals with nine assists, despite the six losses that Robert Morris has had to take this year. Smith had a season-best four goals against SHU. If Smith can top his season-high he set last Saturday, he will be a standout against the Mountaineers.

Jake Boudreau (RMU): Boudreau could be considered an “underdog,” as he has scored eight goals with five assists to total 13 points. He has also made 27 shots this year. He struggled against Sacred Heart, but when it comes to supporting his teammates on the field, he never misses.

Chris DiPretoro (MSM): DiPretoro has stood out the most for Mount St. Mary’s throughout what has happened so far in the 2019 season. The senior attacker has scored 19 goals this year with five assists to total 24 points. While his last game was an overall team effort, DiPretoro’s best games came on March 2nd and 5th when MSM traveled to play Virginia Military Institute and no. 14 Richmond. The attacker’s season high in goals is four. He is going to be expected to help the team with a big performance now that Northeast Conference play has started.

I predict Robert Morris to be able to pick up the win at Joe Walton Stadium on Saturday by a final score of 11-9. This game should be a stepping stone for the Colonials in conference play. The reasoning behind my prediction is that the Colonials are hosting the game and they are playing with a core that consists of Kealey, Smith and Boudreau, all of whom have had solid seasons so far.