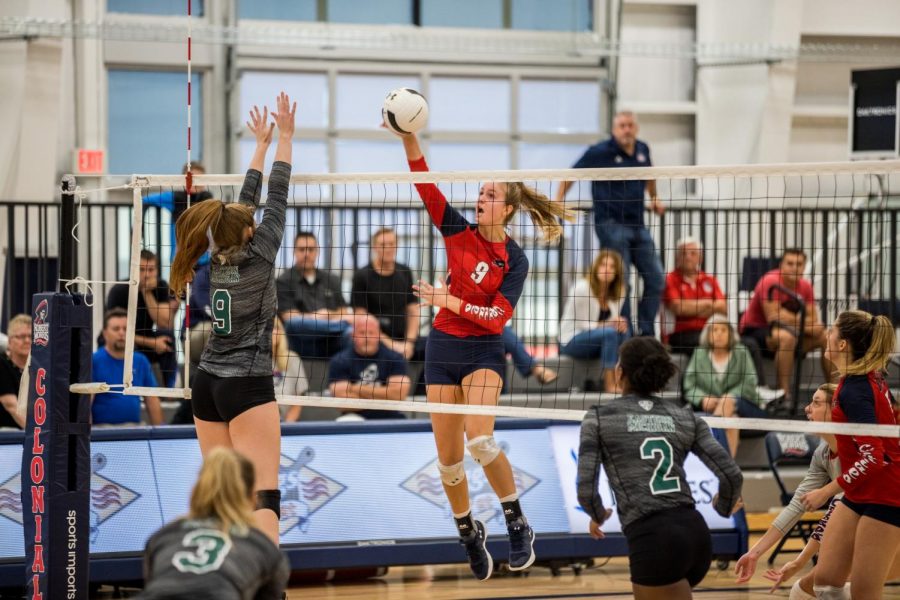 The Colonials are heading into Friday’s game on a three-game skid, including a 3-2 in-conference loss against the Bryant Bulldogs (12-7, 2-0). Saint Francis has lost four in a row. The Red Flash lost their second game of NEC conference play to the Central Connecticut State University Blue Devils (5-8, 2-0), by a score of 3-1.

Recapping RMU
The Colonials are currently on a three-game losing streak. They were defeated 3-1 by Purdue Fort Wayne (11-5, 2-0 Summit League) and started NEC conference play by losing 3-0 to Central Connecticut State University and 3-2 to Bryant last Saturday. The Colonials currently sit tied for 6th in the NEC alongside Saint Francis University and Fairleigh Dickinson (2-13, 0-2).

In their loss to Bryant, the Colonials won the first and third set but dropped the deciding set by a score of 15-12. Sophomore Emma Granger had 14 kills, three aces and four blocks, while Whitney Brown added 37 assists for Robert Morris.
Scouting Saint Francis University
The Red Flash last won on Sept. 8, against the University of Pennsylvania (3-9, 0-1 Ivy League). Since then, they have lost 3-1 to the Oakland University Golden Grizzlies (5-8, 1-1 Horizon League), 3-1 to Miami (OH) Redhawks (10-4, 2-0 MAC). Their NEC losses came against Bryant and Central Connecticut, losing 3-0 and 3-1 respectively. The Red Flash currently sit tied for 6th in the NEC.

Saint Francis’ last game was a 3-1 loss to the Central Connecticut State University Blue Devils. The Red Flash won the first set 25-18, but then dropped the next three. Alexis Lambert had seven kills, two service aces, and 12 digs, while Sophia Esposito and Daysha Shamlin each added 4 blocks in the loss.
Players to watch
For the Colonials, Emma Granger is always one to watch, the 6’4” sophomore has led Robert Morris in kills this year with 148. She is also fifth in the conference in hitting percentage, with a .285 and is tied for third in aces per set, at a .36. Another Colonial to watch for is a sophomore setter, Whitney Brown. Brown is currently second in the conference with 7.92 assists per set.

Freshman Madi Tyus from Plano, Texas is one to watch for the Red Flash. Tyus is currently second in the conference with 3.36 kills per set and ninth in the conference in both aces per set, with .25 and digs, with 3.16 per set. Kimmy Sweeney is also one to watch for Saint Francis. She has led the Red Flash in assists in five out of the last six games. The freshman also has 5.93 assists per set, which is good enough for eighth in the NEC.
Prediction
Robert Morris wins in four sets, 3-1, and gets their first conference win of the year.