Preview: Volleyball looks to return to form against Merrimack 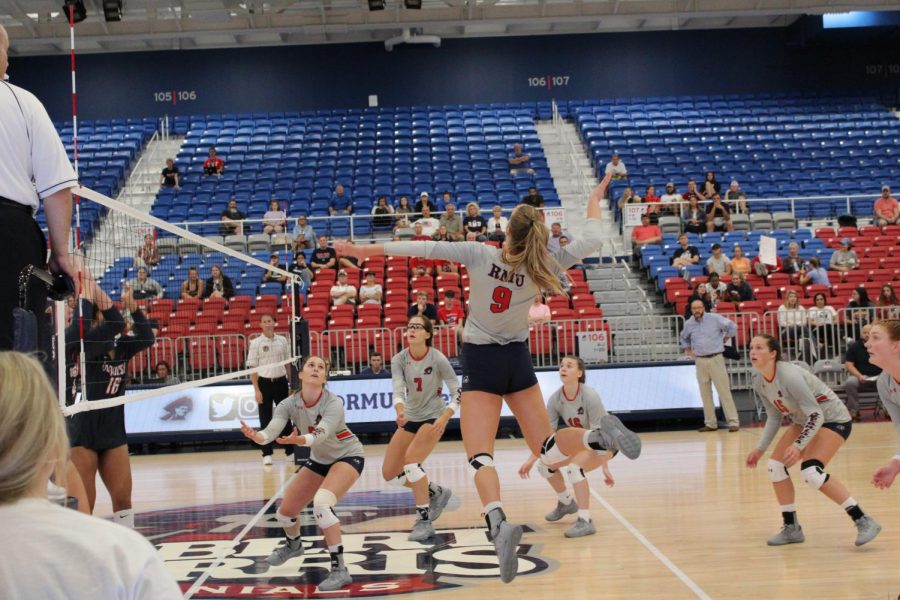 MOON TOWNSHIP– The RMU volleyball team is back in town this weekend to take on Merrimack (1-6). This will be the first NEC action for the Colonials, and they look to give Merrimack an unpleasant welcome to the conference by getting a big win.
Recapping RMU
Robert Morris competed at the YSU Red & White Invitational last weekend and dropped all 3 of their matches. This tournament saw them take on Youngstown State (6-7), Central Michigan (10-2) and Eastern Illinois (1-11). Youngstown State and Central Michigan defeated the Colonials in straight sets, but the last match of their weekend saw RMU go to five sets with Eastern Illinois.

Before the past weekend, the Colonials were 10-0 on the season. As they attempt to put last weekend behind them, their attention turns to Merrimack. Even though their overall undefeated record is gone, the Robert Morris is still undefeated at the UPMC Events Center.
Players to Watch
Emma Granger (RMU)

Granger leads the team in three categories, she has the most kills, aces and blocks. Now is in her junior year, she looks to help lead the team to success in conference play. In the matchup against Eastern Illinois, Granger had 13 kills, 2 aces and 10 blocks. She had the most blocks on the team in the game.

Whitney Brown is another player to watch. She has 408 assists in 13 matches this season. In the last game against Eastern Illinois, she had 40 set assists, the next person behind her had three. Also in that game, Brown had 15 digs, which was third-most on the team in the game. Now in her junior season as well as Granger. We expect these two to continue their great play as the Colonials enter conference play.

Catherine Flaherty looks to help guide Merrimack to a big win over RMU. Flaherty leads the team with 56 kills and is in the top five in digs and blocks. In her last game against Delaware State (3-8), Flaherty was top three in kills and digs in the loss. Flaherty looks to help her team get back on track after starting with a 1-6 record. Flaherty is now playing in her senior season, so you expect her to give it everything she’s got in her final season.

Sperduto leads the team in assists by a large margin. Sperduto is also in the team’s top five in kills, digs and blocks. As she also enters her senior season with fellow teammate, Catherine Flaherty. You can expect her to have the same effort as her teammate. In her last game against Delaware State, Sperduto was a key performer, leading the team in assists and digs. She also had a performance that put her in the top three in aces in the loss.
Prediction
This game is a must-win game for both teams. For Robert Morris, this win will help them get back on track. For Merrimack, a win will get them closer to .500. I believe that the Colonials will win in four sets. This game will take place at the UMPC Events Center at 7 p.m. on Friday, September 27.