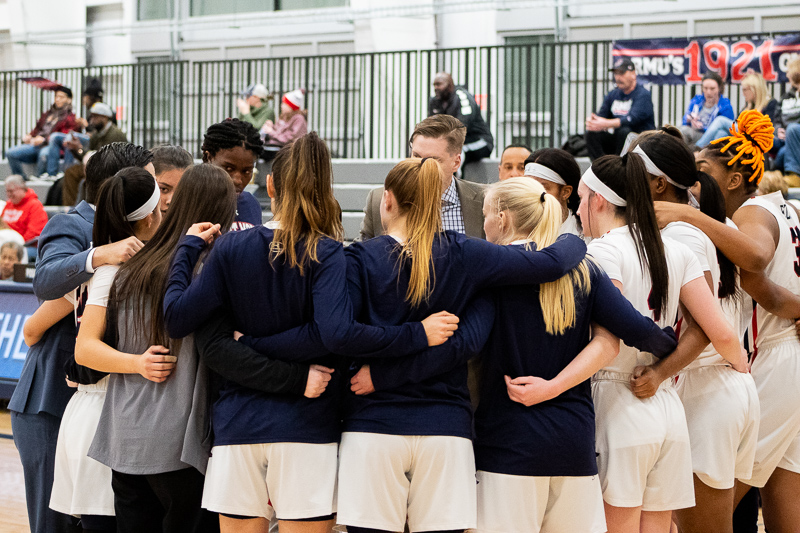 MOON TOWNSHIP — The Robert Morris women’s basketball team (1-1) gears up for their home opener in the new UPMC Events Center against the visiting Youngstown State Penguins (1-1). The team returns home after starting the season on a two-game road trip that had them travel to Texas before heading across the Keystone State.
Recapping RMU
After winning the NEC Tournament last season and making an appearance in the NCAA Tournament, the Colonials began their non-conference slate with a tough opponent as they traveled to Fort Worth, Texas, to take on the TCU Horned Frogs (2-0). TCU entered this season after finishing with a 24-11 record last year and they would come out on top against Robert Morris with a 66-61 victory.

Although the team would lose by five, Nina Augustin had a solid day on the court as she finished with 11 points. She got into a rhythm behind the line, hitting three of her four three-pointers. The Finland native also made both of her shots from the foul line. The team finished on the day shooting 44.2% from the field and 56.3% from the free-throw line.

As the Colonials came back into Pennsylvania, they traveled across the state to take on La Salle University (1-1). The Colonials bounced back from their opening season loss and win by the score of 71-68 in overtime. Augustin would have another strong game, finishing with 14 points, but the best Colonial performance on the day came from Nneka Ezeigbo. She made her presence felt in the paint as she grabbed 12 rebounds and added two blocks and four steals while finishing with 21 points.
Previewing YSU
The Penguins have played similarly to the Colonials, as they split their first two contests, however, YSU played both of theirs on their home court. In their first matchup of the season, the Penguins were victorious by the final score of 87-59 over Canisius (0-1). Youngstown State shared the ball quite well as four of their five starters reached double digits in scoring. Ny’Dajah Jackson led the way for YSU as she totaled 22 points, making three of her five three-pointers. On the day, the team shot 48.5% from the field.

Following that contest, YSU welcomed in-state opponent Kent State (2-0) to the Beeghly Center. The Golden Flashes would hand YSU their first loss of the early season by the score of 82-73. Taylor Petit would lead the Penguins in this one with 17 points, as she made seven out of her 10 attempted field goals. The Penguins would be riddled by turnovers giving the ball up 22 times.
Players to Watch
Nneka Ezeigbo (RMU)

The senior center has built off of her impressive junior campaign to start the year. Last season, she received the honors of the NEC Defensive Player of the Year and NEC Tournament MVP. So far the season she is averaging 15 points per game along with 8.5 rebounds per contest. She has also added two blocks, making her a force in the paint against any opponent. Look for Ezeigbo to have a dominant performance against YSU as she will control down low.

Carrasco has come off of the bench in both games to start the season, however, she has become their go-to reserve. Carrasco, through two games, is averaging nine points per game. She is shooting 66.7% from the field to start this year’s campaign and has six assists. Laura will be a key piece throughout this year as she will come off the bench and produce in timely moments.

The redshirt freshman guard has been an important factor for this Penguins team in the early goings of the season. She has started in both games this year for YSU and she is averaging 16 points per game. Petit has seven assists and 10 rebounds on the season along with three buckets from the three-point range. Her all-around game will be tough to handle for the Colonials.

Another guard to take note of for the Penguins would be Jackson, as she has played well through the team’s first two matchups. She is averaging 13 points per contest along with shotting 50% from the field and 33% from behind the arc. Jackson will complement Petit well and will look to bring the heat against RMU.
Prediction
The strong guard play from YSU and team experience will help the Penguins in this matchup. However, the Colonials are seeking revenge after last year’s loss to the Penguins. Ezeigbo will lead the way for RMU in the defensive front as they will shut down a strong offense in their home opener. The Colonials win by a final of 59-57 in a close thriller.