Preview: Women’s hockey back in action at Syracuse 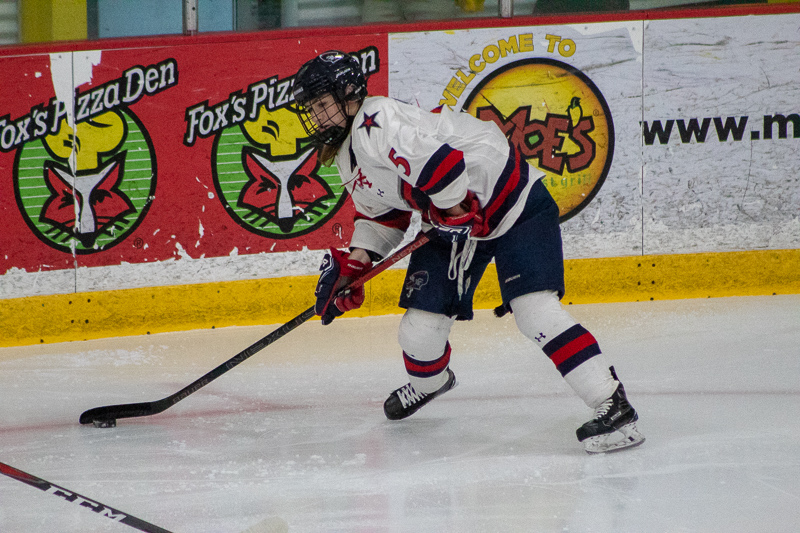 Emily Curlett gets ready to pass the puck against St. Lawrence Sep. 29, 2018. The sophomore defender is a player to watch against Syracuse. (Sam Anthony/RMU Sentry Media) Photo credit: Samuel Anthony

SYRACUSE, N.Y. — The Robert Morris University women’s ice hockey team (8-10-4, 6-1-1 CHA) travels to the Tennity Ice Skating Pavilion in Syracuse, New York to take on Syracuse (4-16-1, 4-4-0 CHA) on Friday night for the first of a two-game set, and their first matches in more than a month. The Colonials had no exhibition or regular season games during winter break.
Recapping RMU
RMU travels to Syracuse after being off for more than a month and having lost their last two contests before the break. Still sitting atop the CHA, you have to go back to December 7 and 8 to see their last game action, where they dropped both games at No. 2 Minnesota (21-2-1, 11-2-1 WCHA). Jaycee Gebhard scored the only goal of the weekend during game one’s 6-1 loss. Amber Rennie picked up the assist on the Colonials lone goal. The Golden Gophers outscored RMU 11-1 over the weekend, leaving no doubt that they are the No. 2 team in the nation.

The Colonials’ last win was December 1, a 4-1 victory over Penn State. They look to get their legs back from break and improve on their 3-5-0 road record against an opponent who is not nearly as strong as Minnesota.
Scouting ‘Cuse
Syracuse faces RMU in a slump this weekend. Head Coach Paul Flanagan has definitely not been happy with their play as they have lost their last ten non-exhibition games. However, during the Theresa Humes Invitational in Montreal, they won all three games they played against Nipissing, St. Francis Xavier and Concordia. They outscored the three teams 17-3 in the invitational, including a 7-0 shutout win against St. Francis Xavier.

Syracuse’s last non-exhibition games were a home-and-home with Colgate University on December 6 and 8, where the Orange were outscored 9-4 by the Raiders in the two-game series. The points by the Orange were spread among seven different players.

Syracuse is definitely a road warrior, as they have not won a single game at home this year. They are 0-6-1 at home compared to their 4-9-0 record on the road. Their last non-loss was all the way back on November 10 against Princeton, where they tied 1-1. To find their last win, you have to go back even further, which occurred on November 4, a 5-2 triumph, coincidentally also over Penn State. The Orange have not won in 12 games, which have spanned over 2 months and is definitely not a way to keep morale up.
Players to watch
Jaycee Gebhard (RMU): For the Colonials, as always, Gebhard needs to be watched. She recorded one of two Colonial points at Minnesota, which was the only goal in an offense-deprived weekend. With 15 goals and 18 assists this season, Gebhard ranks sixth in the NCAA for points and continues to dazzle in her junior season. She seems to factor into almost every goal, so keep your eyes open for lots of scoring chances when she is on the ice.

Emily Curlett (RMU): While the sophomore defender did not factor into the scoresheet at Minnesota, she is second on RMU in points by a defender with 11. look for her to put up more points at Syracuse this weekend getting big minutes on the blue line. She is also second on the team in shots with 81, only six behind Gebhard for the team lead.

Lauren Bellefontaine (SU): For Syracuse, watch out for freshman forward Lauren Bellefontaine. Bellefontaine has impressed in her first season with the Orange, as she is second in points on the roster with 13. She scored against Colgate in Syracuse’s last regular season action and looks to add to that total this weekend.

Alli Munroe (SU): The name that certainly jumps out the most on the roster for Syracuse is senior defender Allie Munroe. She leads the Orange with 14 points and recorded an assist at Colgate. The Colonials need to watch out for number nine quarterbacking the point, as she has fired the most shots for the Orange this year, with 60 shots thus far in the campaign.
Prediction
Both teams had a month break, and will likely start out slow due to rust. The Colonials will ultimately top the Orange in both games due to their deeper roster, and Syracuse’s struggles at home and in their last 12 games. Syracuse’s losing skid will stretch to 12 after this weekend.