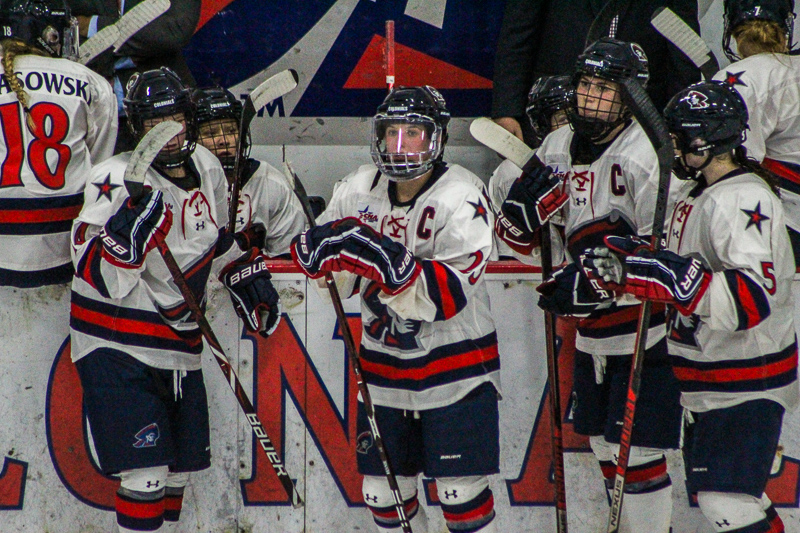 PITTSBURGH — After coming off the long holiday break with a split with Syracuse (5-17-1, 5-5-0 CHA), RMU Women’s Hockey (9-11-4, 7-2-1 CHA) looks to “skate for a cure” against RIT (9-10-4, 5-4-0 CHA) this weekend. These game will be a special one with a focus on finding a cure for mental health stigmas. The colonials and Never Give Up radio are looking to raise $5,000 for the cause.
Colonial Checkup
As for the game itself, the Colonials enter this game still leading the CHA with 15 conference points, ahead of Mercyhurst (9-10-3, 6-3-0 CHA) with 12. The line of Jaycee Gebhard, Lexi Templeman and Amber Rennie continue to dominate the CHA with Gebhard still leading the league in points by a landslide. Lauren Bailey started both games against Syracuse allowing only four goals the entire weekend, and she will likely be the starter yet again Friday and Saturday. Despite an overtime loss, this team is looking great and hungry for more conference points this weekend as winning the regular season is priority number one.
Scouting RIT
RIT currently sits 3rd in the conference behind Mercyhurst with 10 conference points. The Tigers have won four games in a row including one win against Mercyhurst, with the other game of that series being postponed giving them time to rest.

Unlike RMU, this team does not possess a true “number one” player. But that is not necessarily a bad thing though as this Tigers team scores by committee. Their leading scorer, in Kendall Cornine, has a respectable 16 points, but if you compare this to RMU, four players have more than that. This team has twelve players with two or more goals on the season and they tend to have lower scoring games, which is how they get their wins.
Players to watch
Terra Lanteigne (RIT): Goaltending has been stellar for this team as Lanteigne is the clear cut number one goalie for the Tigers. She has started in all 22 games only splitting games three times. On top of this, she owns a phenomenal .938% save percentage and a 2.12 GAA (goals against average). If the Colonials look to win this game, they must get as many shots as possible on Lanteigne and work their offense.

Kathryn Kennedy (RIT): RIT was able to beat Mercyhurst thanks to the help of Kennedy who had a goal and assist in the matchup. Kennedy is perhaps the definition of depth scoring, only having eight points this season but at the same time possessing the skills to be able to step up and get the job done against teams like Mercyhurst. As a senior, Kennedy was named CHA player of the week having two consecutive multi-point games in a row heading into RMU.

Jaycee Gebhard (RMU): Of course, Gebhard makes this list but the entire line of Gebhard, Rennie and Templeman or the “GRT” line if you will, has been incredible. This line, as mentioned before has been unstoppable and it isn’t just Gebhard. Both Templemen and Renee have more points than anyone on RIT. Also, Templeman is tied for third in the CHA for points with 21, whereas Rennie ranks sixth with seventeen. Gebhard is one of those players that makes everyone around her better, but at the same time, both Rennie and Templeman are talented hard working players that deserve more credit.
Prediction
Even without the whole mental health awareness event, this game is a good one on its own, featuring two CHA rivals battling for the top spot in the conference. RIT is certainly a great team especially as of late, but the Colonials will rise to the occasion. Not only do they want to win due to the special event, but they also want to win for points in the conference as well. It will be close, but RMU will sweep RIT this weekend 3-2 and 4-1 respectively.

These two teams did play each other back in November with RMU winning 3-1 and 3-0 in New York, and there will be a sweep again this weekend at home. The game on Friday will start at 7:05 p.m. and Saturday at 3:05 p.m. The Friday game will be followed by a skate with the Colonials and there will be several opportunities to donate to the mental health awareness cause including this link here. https://www.nguradio.org/donate