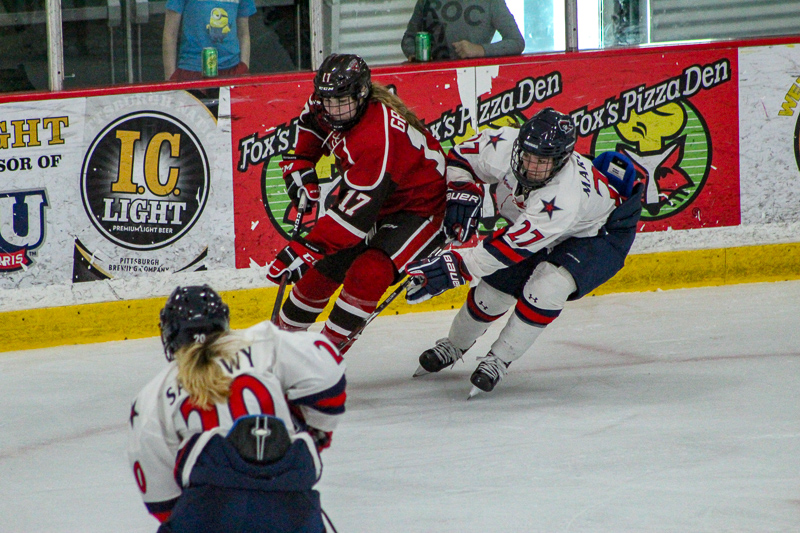 ROCHESTER, N.Y. — The Robert Morris women’s hockey team (4-5-1, 2-1-1 CHA) has won three of their last five and look to continue their recent streak of success against the RIT Tigers (1-4-3, 0-0 CHA). The Tigers have not beaten the Colonials in two years and their last triumph over RMU came on Feb. 20, 2016, in overtime. The Tigers will open conference play with these two games against the Colonials.

The RIT Tigers finished last in the CHA last year with a conference record of 1-18. The Tigers have had struggles defensively as well as offensively through their first eight games this season.

They were outscored by their opponents 22-15. The problem for RIT seems to be the fact that they have a habit of ending games in ties rather than wins or losses. Of their first eight games, four have been ties. If RIT does happen to win one of two it’ll come at the hands of two players in particular.

Senior Kendall Cornine led the Tigers in points last year with 16. Cornine currently is performing at a point per game rate. If the Tigers look to mount any offensive pressure on RMU, look for Cornine to be at the center of it.

Another Tiger looking to make a difference this weekend is senior Mallory Rushton who was second in scoring last year for the Tigers with 14 points. Rushton and Cornine make up most of the RIT attack up front, but Rushton tends to spend some time on defense as well. Having someone who can play both forward and defense on the ice is a versatile weapon that RMU will look to keep in check come game time.

The Colonials have their share of offensive weapons as well in junior forward Jaycee Gebhard. Gebhard has six points in her last three games that resulted in two wins and a tie. Gebhard is also scoring 1.3 points per game and leading the team in points as well with 13. Expect the entire first line for the Colonials to be flying this game with Gebhard at the helm.

A reliable offense is only as good as the defense behind them though, and that starts with senior goaltender Lauren Bailey. Bailey is coming off a 17-save shutout win over Lindenwood and she even has an assist this year. For a team that generates a lot of shots, they’re just as good at defending them as well with Bailey steadily guiding them to wins.

The Colonials are currently second in CHA standings. Hypothetically they can be leading the conference after this weekend if they win both games as expected. Mercyhurst (5-5, 5-1 CHA) would have to lose both games against Lindenwood(1-6-1, 0-3-1 CHA), which is not likely, but if they do the Colonials can leapfrog the Lakers to take the top spot in the conference. Even if Mercyhurst wins their games, this is a great opportunity for the Colonials to gain some ground in the standings. RMU should take these two games without contest.