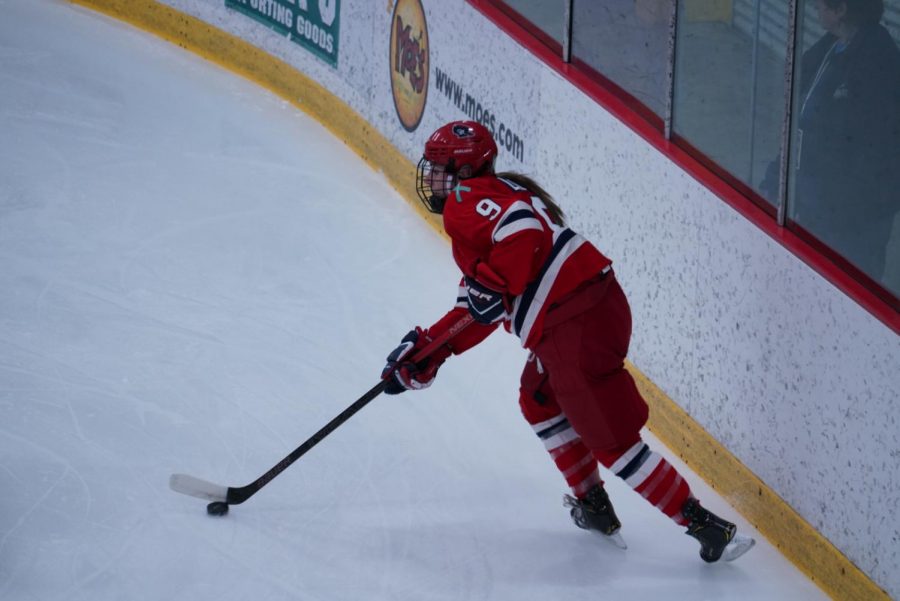 MOON TOWNSHIP — The RMU women’s hockey team (11-11-4, 9-2-1 CHA) travels to the Pegula Ice Arena in State College to take on Penn State (10-11-5, 4-7-1 CHA) for the first of a two-game set. In the teams’ last series against each other, the Colonials won both games.
Recapping RMU
The Colonials go to Penn State with a three-game win streak. Over the weekend, they had a series against RIT (9-13-14, 5-7-0 CHA) where they took both games. Fueled by a strong third period where they dominated the ice, the Colonials won game one 3-1. In the second game, two goals by Emily Curlett and a 14-save shutout by Lauren Bailey gave the Colonials the 2-0 win. Curlett had three of the Colonials’ five goals over the weekend, and Lauren Bailey was named CHA Goalie of the Week following the RIT sweep. The Colonials will look to stretch their win streak to five following this weekend set at Penn State.
Scouting PSU
The Nittany Lions will face the Colonials after going winless in their last three games, having not won since Jan. 21. Last weekend, they traveled to No. 4 ranked Princeton (15-3-5, 12-1-3 ECAC) for one game, a 4-2 loss. After being down 4-0, they powered back in the third with goals from Meike Meilleur and Sophie Slattery, but the lead for Princeton was too much. They will look for revenge against the Colonials this weekend, who swept them at Colonials Arena in December the last time these teams faced.
Players to watch
Emily Curlett (RMU): Curlett had a three-goal weekend against the Tigers, and continues to play well this year. Picking up a power play goal as well, she is second in points by a defender for RMU this year with 15 and leads RMU in shots with 109. Look for her to continue to fire the puck on net this weekend, especially on the power play.

Lauren Bailey (RMU): After allowing one goal during the Tigers series, Lauren Bailey picked up CHA’s Goalie of the Week honors for her performance last week. Bailey has had a strong campaign thus far with a 10-9-3 record. She has a .903 save percentage, and a 2.34 GAA this season. Look for her to backstop the Colonials this weekend.

Rene Gangarosa (PSU): After picking up the primary assist on both goals at Princeton, freshman defender Gangarosa picked up her second CHA Rookie of the Week honor this season. She last achieved this on the week ending on Oct. 1. This season, Gangarosa has a goal and four assists but leads the team in plus/minus with a +7 rating. She is also fourth on the team with 36 blocked shots.

Natalie Heising (PSU): By far the most impressive name on the Nittany Lions’ roster is Heising. Heising leads Penn State in points with 23 which is 10 points above the next player on the list, Kelsey Crow. After a pointless game at Princeton, she will look to add to her team lead this weekend.
Prediction
Expect the Colonials to continue their hot streak this weekend. Lauren Bailey will continue her hot streak as well, shutting out the Nittany Lions 2-0 in game one and winning 3-1 in game two.