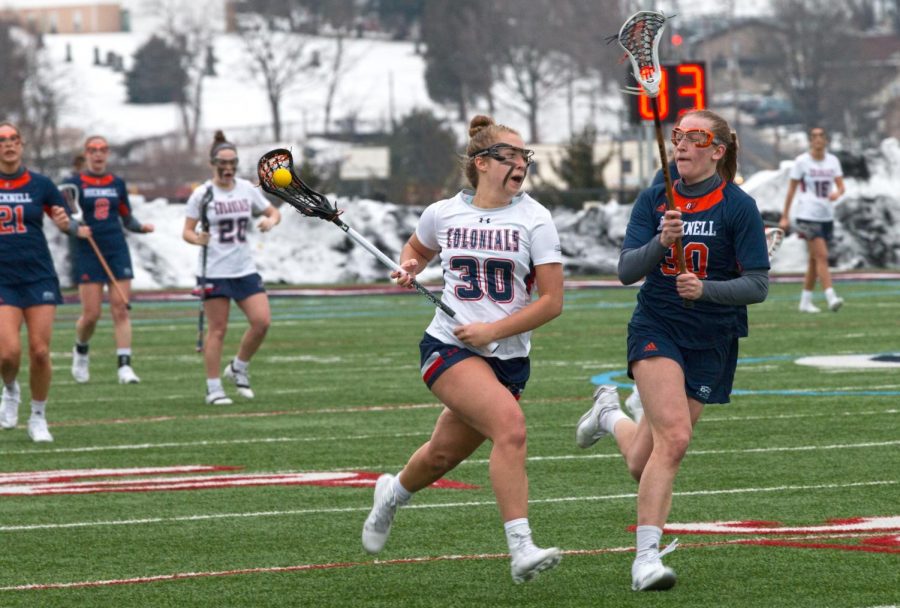 MOON TOWNSHIP– The Robert Morris women’s lacrosse team (10-4, 3-2 NEC) looks to keep their Northeast Conference playoff hopes alive against the Bryant Bulldogs (7-7, 3-2 NEC).
Recapping RMU
The Colonials dropped the first two games of the 2019 conference season to Wagner and Mount St. Mary’s. RMU’s defense was unable to slow down both of their NEC opponents in early conference play. On the other side of the ball, the Colonials offense was unable to find the back of the net. RMU was outscored 31-10 during the two-game skid.

An 18-5 dismantling of the Saint Francis Red Flash sparked a three-game winning streak the Colonials that they will look to turn into a four-game winning streak on Friday. Both the offense and defense, for Robert Morris, have found their footing over the previous three games. Over the course of these games, the Colonials have averaged 16 points per game while holding teams to just 5.3 goals a game.
Previewing Bryant
The Bulldogs experienced an exact opposite conference record to this point. Bryant dominated Sacred Heart, LIU Brooklyn, and Central Connecticut State. The Bulldogs averaged 17.3 goals per game over that stretch.

Bryant is currently on a two-game losing streak mainly due to the lack of offensive support. The offense that once averaged 17.3 goals a game, has 16 goals total in the past two games.
Players to Watch
Jess DeMeo (Bryant): The senior attacker has started all 14 games for the Bulldogs. DeMeo has found the back of the net 44 times this year and averages 3.14 goals per game, both of which ranks second in the NEC. DeMeo also ranks seventh in the conference with 3.24 points per game.

Caitlin Breglia (Bryant): Bryant’s offense flows through their junior attacker. Breglia leads the team in points and assists with 55 points and 31 assists. She leads the NEC in assists per game with 2.21. Bryant will need a big game from Breglia in order to win.

Mackenzie Gandy (RMU): Gandy leads the Colonials offense in goals and points with 37 goals and 54 points. Her 3.86 points per game ranks third in the NEC. Gandy averages 2.64 goals per game, which ranks sixth in the conference.

Melanie Gandy (RMU): The other half of the Gandy twins is the only Colonial with 20 or more goal, points, and assists. Gandy’s 26 assists leads the team and her 22 goals and 48 points ranks second on the team. Gandy ranks second in the conference with 1.86 assists per game.
Prediction
The trends of both teams will continue in this game. The Robert Morris offense is going to be too much for the struggling Bryant defense to handle. On the other side of the ball, the Bulldogs offense has recently gone cold and the RMU defense is going to keep it that way. The final score will be 14-4 in favor of Robert Morris.