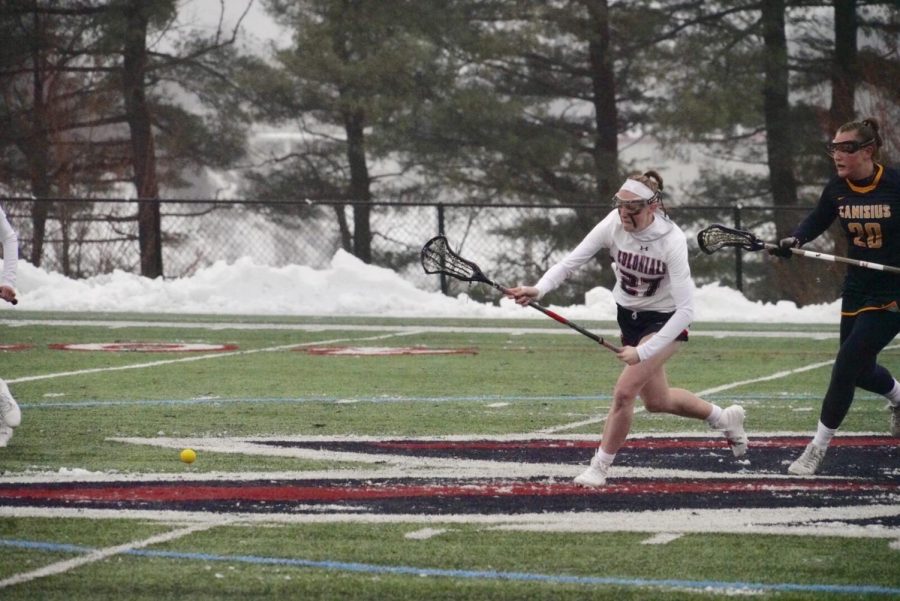 MOON TOWNSHIP — After a strong start to the year, the Robert Morris women’s lacrosse team (4-2) looks to continue their season as they travel to Olean, N.Y. to face the St. Bonaventure Bonnies (1-5) on Saturday.

In the Colonials’ last game, they thrashed Gardner-Webb (3-3) by a score of 20-8. Leading the Colonials were Melanie Gandy and Bailey Christianson. Gandy, a junior from Baltimore, Md. had six goals on the night; while Christianson, a freshman from Ellicott City, Md. had three in the game. The Colonials had five penalties on the night, including two by Shannon Lynch.

On the short season so far, the Colonials have outscored their opponents 68-56. They are led by the Gandy twins, Melanie and Mackenzie. Mackenzie is leading the Colonials with 13 goals, 11 assists for 24 points; while Melanie is close behind, with 13 goals and three assists for 16 points. Katelyn Miller is currently eighth in the NCAA with a .527 save percentage.

In the Bonnies’ last game, they dropped their second straight, losing 19-6 to the Mercer Bears (2-5). Madison Mundenar netted three goals for the Bonnies. Savannah Clarke made 12 saves in the loss.

Mackenzie Gandy (RMU): Leading the Colonials with 24 points (13g, 11a), Gandy is a seriously offensive threat for Robert Morris. Last week against Gardner-Webb, Gandy had one goal and three assists.

Katelyn Miller (RMU): Eighth in the NCAA in save percentage sits Miller with a .527. Miller’s 10.54 goals against average is also in the top portion of the NCAA, at 34th. In her last game, Miller made six saves and allowed eight goals.

Destinee Johnson (SBU): The leading scorer for the Bonnies by a large margin sits Johnson. The 5’3” junior from Rush-Henrietta High School in Rochester, N.Y. has eight goals and 13 assists on the year. Against both Kent State (0-6) and Kennesaw State (2-4), Johnson had three goals.

Rylee Arnold (SBU): The leader in goals for St. Bonaventure, Arnold has 10 goals on the year and only four assists. Last game against Mercer, Arnold had an assist and three shots.

The Colonials will win this one, and give them their second straight win. St. Bonaventure will not pose much of a threat on Saturday, and both Mackenzie and Melanie Gandy will score three goals in the afternoon game.