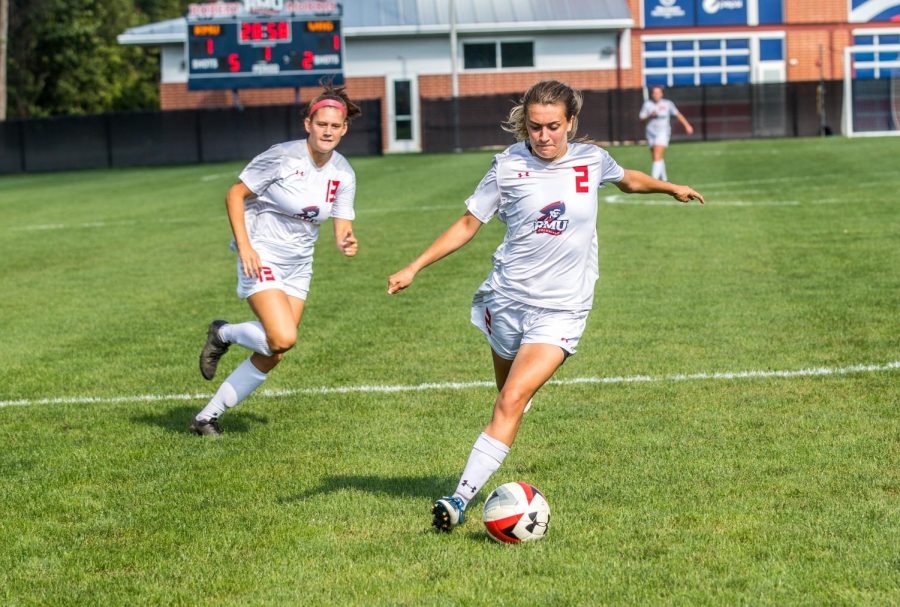 MOON TOWNSHIP– The Robert Morris women’s soccer team (4-7-1, 2-2-0 NEC) returns to the North Athletic Complex after their first NEC road trip when they take on their Keystone State rivals in the Sacred Heart Pioneers (5-5-2, 2-1-1 NEC) on Friday.
Recapping RMU
The Colonials look to improve to 3-2 in the NEC standings after winning and dropping one game each during their two-game road trip. A valiant effort against Wagner (4-7-1, 2-1-1 NEC) ultimately resulted in a 2-1 loss for the Colonials, but they rebounded nicely against LIU (2-9-1, 1-3-0 NEC) in a 4-2 victory. Against LIU, RMU scored all four of their goals in the first 25 minutes of the game, including two goals from midfielder Devan Noll, and a three-point performance from Sheridan Reid, who was named a Co-Rookie of the Week in the NEC.
Scouting Sacred Heart
The Pioneers have rebounded nicely after an 0-2-1 start to their season, only losing three of their next nine games. The Pioneers have a surprising amount of starting freshmen this year, including their starting keeper Elyssa Kipperman. In fact, they have no starting seniors on their squad. Sacred Heart has gone 1-1-1 in their last three games, their last one being a 3-0 beatdown against NEC-leading Fairleigh Dickinson (5-5-2, 4-0-0).
Players to Watch
Devan Noll (RMU)

As mentioned earlier, Noll scored her first two collegiate goals against LIU on Sunday, which must have felt pretty special given that she transferred from LIU to play for RMU this season. A redshirt sophomore, Noll has seen limited minutes in every game this season but has gotten her first two starts against Wagner and LIU. Along with her two goals, she played a career-high 75 minutes. Noll hopes to build upon her performance against Sacred Heart when she makes her third start in a row.

Sullivan, a freshman from New Jersey, is following a similar path of trajectory as Noll. Sullivan will make her fifth start in a row for the Colonials and will carry some momentum into the match after picking up her second career assist on the opening goal in the LIU game. She will also help contribute to a solid, young midfield core that Robert Morris has been building this season.

Clarkin has burst onto the scene for the Pioneers this season. She leads the team in goals (five), shots (41 attempts, 19 on goal) and is tied for the team lead in assists (two) as well; all while being a freshman. Despite this, Clarkin has only put up points in three games this season for the Pioneers. When she puts up a point, she will likely score multiple in the same game. Her last point-scoring performance was September 27, where they tied Wagner 2-2. Still, Clarkin is a dangerous scorer and will need to be kept in check by the RMU defense.

Behind Clarkin’s torrent but inconsistent scoring is Azria Malloy, another freshman who has put up solid offensive numbers for the Pioneers. She has three goals and one assist on the season so far and has scored two of those goals in her last three matches. Considering her recent momentum, she will be another forward to keep an eye on for the visiting Pioneers.
Prediction
It should be a good matchup between the Colonials and the Pioneers. With both barely being separated in the NEC standings, this is a key match for both teams to win. Sacred Heart wants to bounce back after a bad defeat to Fairleigh Dickinson, while the Colonials will want to carry the momentum from their big win over LIU. I predict a close game and 1-1 draw between the squads.