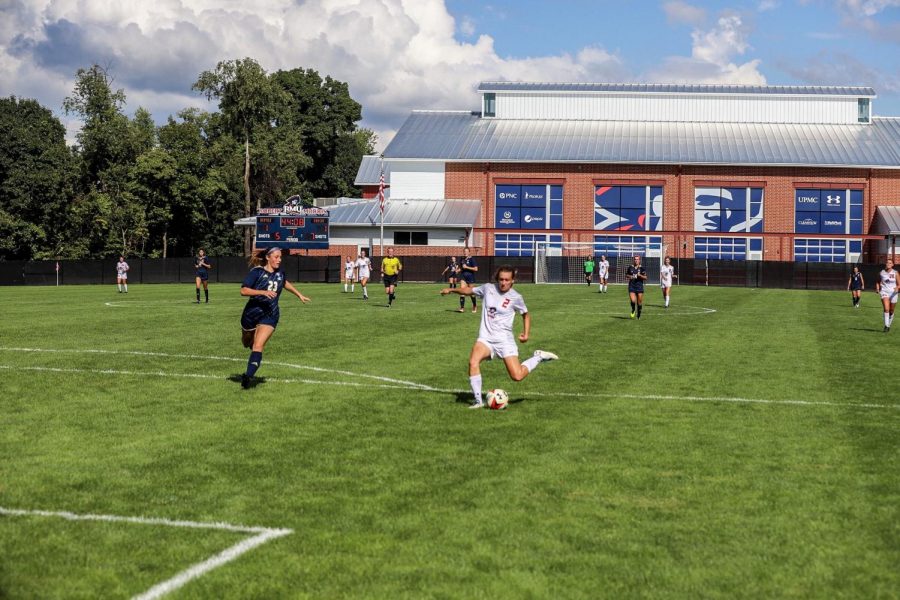 ATHENS, Oh. — The RMU women’s soccer is looking to get on the right track after a rough start to the season five games in, going 1-3-1. However, they will have to get the ball rolling with a win against a tough Ohio Team (5-0). Robert Morris has been on the wrong side of history between these two teams, with Ohio winning four out of the last six matchups. The Colonials are usually better at home, however, they will have to go on the road for this matchup.
Previewing RMU
The Colonials women’s soccer needs a win to get some momentum going. They are coming off a tough 2-1 loss at Howard last Friday. At one point the game looked like it was over, with Howard up 2-0, but then Robert Morris got the spark they needed to get back into the game. They got a call to go their way, and freshman Kayla Veloso-Lima got the chance to score her first NCAA goal, by being rewarded with a penalty kick. She would capitalize on her opportunity to cut Howard’s lead in half, but it would not be enough as Howard would go on to win.

The Colonials were not able to get going on offense, as they were only able to generate only four quality scoring chances on Howard goaltender Alayah Hightower. The offensive game for RMU has been off to a rusty start, only scoring more than one goal in one game against Canisius, and the defense has given up more than one goal in three of its first five games. RMU hopes that going up against a tough Ohio team will give them the spark they need to get their season back on track.
Previewing Ohio
Ohio women’s soccer is coming off of an impressive performance against Southern Illinois, posting a 7-0 shutout. The unbeaten Bobcats scoring was well distributed, as the outing saw six different goal scorers. Ohio would carry a 1-0 lead into halftime and then would explode with six goals in the second half, two of those goals came from freshman Heather McGuire. Ohio’s offense ended up being strong overall, generating a solid 25 shots on goal, and also making the jobs of the goaltenders, Sydney Malham and Reese Dorsey, easy, only letting up three shots on goal the entire game. Ohio has had a successful start to the season, scoring more than one goal in four of its first five games, and giving up only one goal or less in all five games. Ohio will look to continue their hot streak and success with a win against RMU this Friday.
Players to Watch
Sheridan Reid, Robert Morris, Forward

Reid has shown her scoring ability this season, leading the team with three goals, and is also very capable of generating offense.

Veloso-Lima not only is second on the team in scoring but also shows that she can be a playmaker, leading the team with assists.

Townsend, a freshman, has shown her potential on the field, leading the team in assists and also in shots, which shows how crucial she is to the offense.

Milesky has also shown her ability to generate offense, leading the team in attempted shots and also is second in scoring on the team.
Prediction
With both of these teams looking for a win, it is a more crucial game for RMU, since they could use a win to get things going right for them. While I think this will be enough to motivate RMU and help them to keep it close against an unbeaten Ohio team, I believe Ohio will still come away with the win, but it will not be easy for them.