Preview: Women’s soccer will attempt to break .500 in the NEC 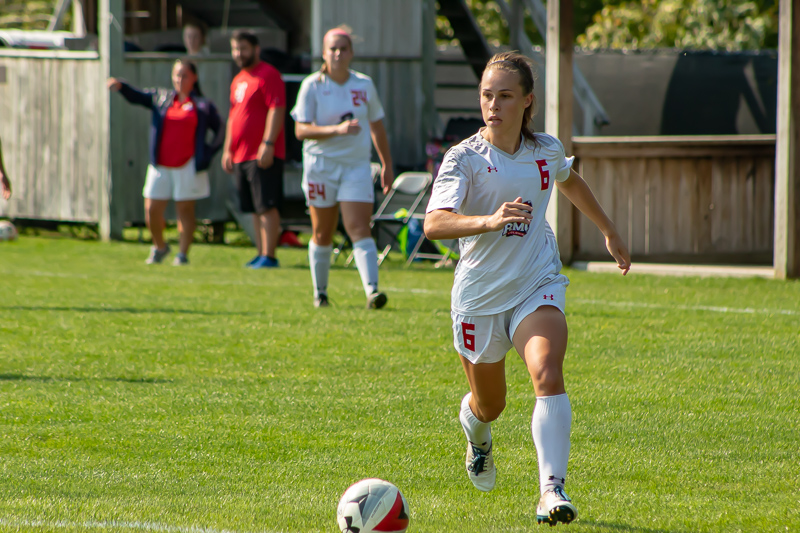 The Robert Morris women’s soccer team (3-9-0, 1-1-0) will have another road game this Sunday as they take on the Fairleigh Dickinson Knights (2-7-3, 0-1-1) at University Stadium in Teaneck, New Jersey. Both RMU and Fairleigh Dickinson are coming off losses to Central Connecticut State (8-1-2, 2-0-0) by scores of 1-0 (RMU) and 2-1 (FDU). Although RMU didn’t score in their previous game, goalkeeper Sydney Bruckner had a great game making 8 saves with the lone goal coming from a penalty kick.

Recapping RMU:
The offense in RMU’s first NEC game of the season against Wagner (1-9-0, 0-2-0) showed some bright flashes in a 2-1 win. The Colonials outshot their opponents 19-3 with RMU goals coming from Jane Schleicher and Kelley Kristina. RMU’s offense in their last game against Central Connecticut was practically shut down. Not their best performance of the season, getting off only two shots, with neither of them hitting the net. RMU is 1-1 in their conference after they finished their non-conference slate with a record of 3-9.
Scouting Fairleigh Dickinson:
The struggling Fairleigh Dickinson team comes into this match-up with a 0-1-1 NEC record and 2-7-3 overall record. Prior to their loss against Central Connecticut, they managed to come out with 1-1 draws against Hartford (8-1-2, 1-0-1) and conference opponent Mount St. Mary’s (1-6-3, 0-0-2). FDU only has nine total goals this season with three of them coming from sophomore midfielder Viktorija Miseljic.

The defense for FDU seems to be struggling a bit their last few games, allowing 16 shots against Central Connecticut and 13 shots in their respective games against Mount St. Mary’s and Hartford. Sophomore midfielder Sofia Albertsson seems to be heating up now with two goals and two assists in her last three games, almost recording a hat trick in the match against Mount St. Mary’s.
Players to watch:
Jane Schleicher (RMU): Senior midfielder Jane Schleicher looks to continue her tear this season with an NEC leading nine goals and 18 points. Schleicher leads multiple individual stat lines in the conference including shots, game-winning goals and the previously mentioned goals and points.

Sydney Bruckner (RMU): Goalkeeper Sydney Bruckner is also leading the NEC in saves with 66. She continues to be practically a brick wall in each game this season.

Amanda Fitzgerald (FDU): The FDU goalkeeper is also a top five keeper in the league. Amanda Fitzgerald has two shutouts and a .784 save percentage as she has allowed 16 goals on 140 shots faced this season.

Lea Egner (FDU): Freshman midfielder Lea Egner is tied for first in the assist category in the NEC with three. Although she does not have any goals this season, she certainly seems to be a playmaking threat.
Prediction:
Coming off of being shut out their previous match against CCSU, I believe RMU may be able to pull off a win against FDU to put them 2-1 in NEC match-ups. The equally struggling FDU seems to have a hard time against teams within the NEC in the small sample size of this season as they have allowed 29 total shots in their two conference games. I predict RMU will come off the field with a 2-1 win against the Knights with goalkeeping being the prime reason in this game.