Pryor looks to lead young squad back to the promised land 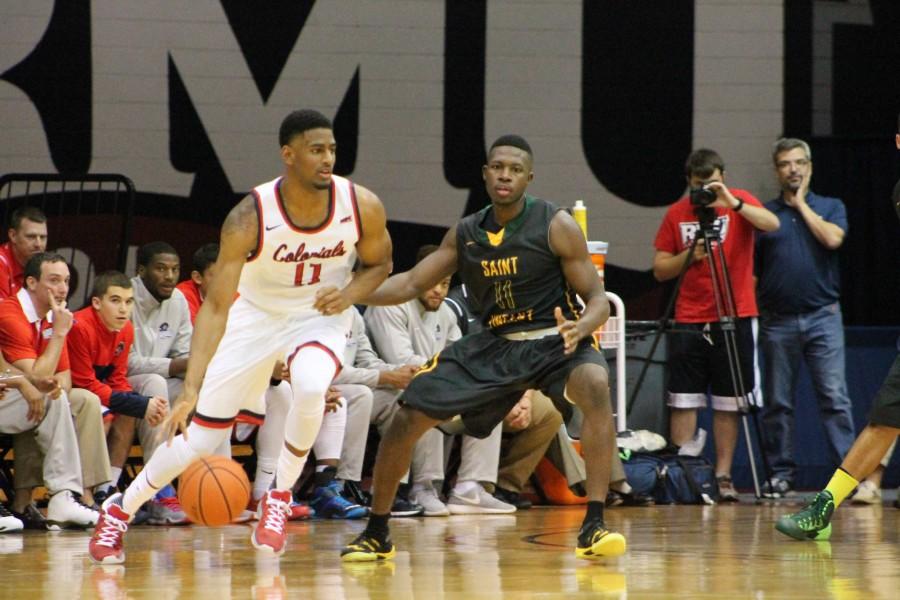 “Can’t get lazy,” Rodney Pryor said slowly. Hunched over in a comically small folding chair, the 6-foot-5 senior star reflected over his summer, and the time spent throughout the off season. The returning second-year JUCO transfer looked off to his teammates in the Gus Krop gym as coaches shouted critique that echoed out into the breezeway of John Jay Center.

“New expectations come, and for me individually,” Pryor said, continuing. “I had a really good year last year and now I’m going to be on top of the team.”

Despite this only being Pryor’s second season with the Colonials, transferring from Cloud County Community College, he has already made a name for himself. He led Robert Morris in scoring with 15.6 points per game, and has tied for team-high honors in double-figure scoring games with 26 last season. In addition, Pryor has made a team-leading 81 three-point shots and was one of only two players to take the court in all 35 games last season.

Pryor described himself as “trying to become a machine as best as possible” the past few months. “I think that’s what the off-season is about, pushing yourself to the limit so when the season comes you’re ready for it.” Spending a lot of time in workouts and practice pushing himself to set an example for the team, Pryor continues to challenge himself as best he can. Getting extra wind sprints, extra court time in practice, and adding extra weight to his workouts are a couple of the ways he has tried to continue raising his own intensity level for the upcoming season.

One man being ready for the season doesn’t make a team, however, and expectations of this year’s freshman class are high, especially with the sheer volume of talent.

Robert Morris ended last season down to only ten men on their bench. This year there is new blood on the front lines in the form of seven freshman (or transfer) players stepping into the paint for RMU. “We’re young,” Pryor himself stated, concerned with the pure number of younger players being inaugurated into college basketball this season, hopeful that they will pick up team concepts and fall into place as quickly as possible.

Young players yield new challenges to a team as they grow accustomed to the college atmosphere, classes and the lifestyle of Division I basketball. This is not a journey all seven newcomers have to take alone – a bench of experienced mentors will be there to help them.

These seven guys have no small amount of work ahead of them, even before they tip off for their first game. Lucky Jones’ shoes need to be filled this semester, and that is a daunting task.

“The guys that have been here need to set the standard; I think that’s one of the most important things,” Pryor noted. “We can say the right things, but if you’re not doing it guys aren’t going to follow, guys follow examples. “

So far, so good is the underlying message from the team right now, after a successful exhibition rout of St. Vincent College on Nov. 3. The Colonials willed their way over the Division III Bearcats, 77-57, in front of a somewhat surprisingly large Charles L. Sewall Center crowd.

Led by true freshman Matty McConnell’s game-high 23 points (8-13), including an impressive 7-of-12 from behind the arc, the rest of the newcomers followed suit. Freshmen guards Steven Whitley and Jordan Lester racked up nine and seven points respectively, adding a combined five rebounds and one assist in the contest.

Giles, who started the game at the swing position, managed to collect a solid four points, five boards, and a game-high four blocks in his Colonials debut. Pryor, along with fellow returning starter Kavon Stewart, took leadership of the young squad, calling out plays and directing teammates whenever they were out on the floor.

Robert Morris officially opens its 2015-16 campaign on the road, traveling to an Ivy League stud in the University of Pennsylvania on Friday, Nov. 13. Tip-off from Philadelphia is set for 5:30 p.m., with the Colonials hungry to get their non-conference schedule underway.

***Zach Laufer contributed to this article