As a new era of Robert Morris football begins under John Banaszak, RMU Sentry Media caught up with the first-year head coach to gain his thoughts on the team a week into training camp. 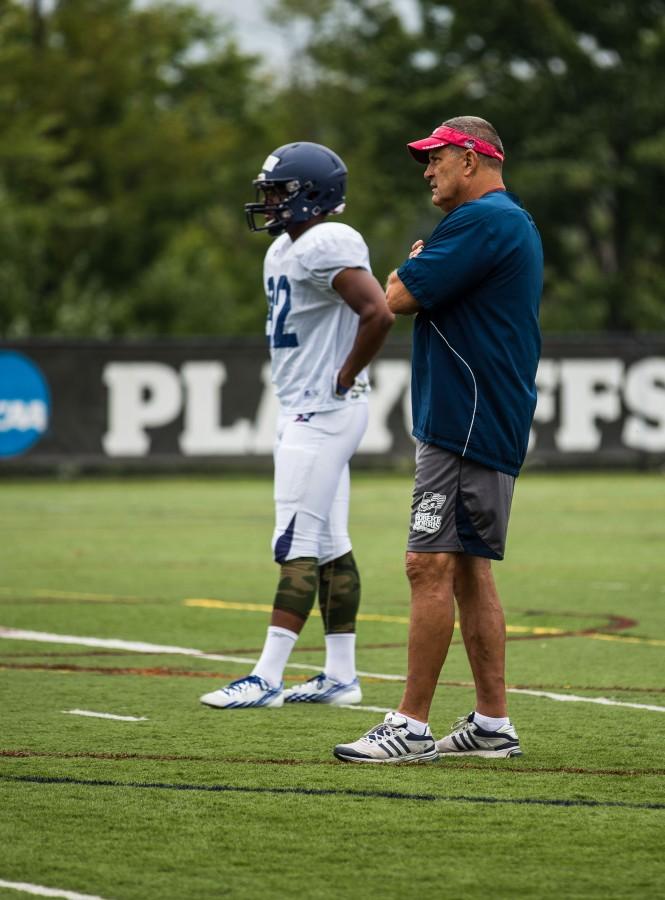 On beginning his first preseason as head coach at RMU:

“For me personally, its been exciting. The kids have responded and came into camp in great shape. As a staff, we’re very excited about that. Our coaching staff is ready for training camp. Things have gone very smoothly in the first week. So, me taking over is irrelevant to what we’re doing on the field because so far, we’re pretty sharp.”

On the new spread offense being installed:

“Obviously, it’s a completely different offense that Coach [Darrin] Hicks brings to the table. We’re trying to speed things up a little bit. We’re trying to do some things differently. We’re still going to run the football. We still want to be a balanced offense, and I think we can achieve that.”

On the addition of defensive line coach Cornelius Coleman to the staff:

“Coach Coleman brings a PH.D. to the coaching staff. You know, I coached the defensive line here for 11 years and that probably got stale. He’s brought some new techniques in and I think our defensive line benefits from that.”

On the team’s conditioning:

“The players, because of the shape they came in, we have been able to concentrate on football instead of conditioning. They are in very fine condition. This weather has not helped us at all, but it will get hot and we’ll be able to practice in the hot weather.”

On the offseason adversity:

“The players have bought in to what we’re trying to do. The offseason was pretty difficult for our football team. We lost five or six kids for disciplinary problems. But the kids that are still here have learned a lesson as to what they have to do in order to play.”

On replacing key defensive players from a year ago:

“Coming into camp, we thought we were real thin on defense. The young kids we got have exceeded our expectation level. I’m really, really happy with our freshman defensive players. Those kids are really talented and they’ve made our defense much better. Those young kids are going to play.”

On the four-man quarterback competition:

“The right word is competition. It is a competitive situation. There are four guys and there’s only one ball. They are competing very hard. Coach Hicks has done a great job preparing them, and, you know they’re going to go after things. We’ll see, they had a very good scrimmage on Saturday and I’m looking forward to the end of this week.”

On when to expect a decision to be made:

“It may take a while. We’re going to look at it this week again very closely. Try to get each quarterback the same number of reps in order to evaluate them in the proper way. And then the guy that we go with, he has to be the leader of that offense and be able to take charge of what’s going on. I think we’re going to reach that.”

On the tough 2014 non-conference schedule:

“I really like our schedule. Eastern Kentucky tattooed us pretty good down there last year. It’s great to open against a team that you’ve played, a quality football team, a perennial top-25 football team. Then, we go to North Dakota to get another true test of FCS football. If we’re going to play FCS football, we’re going to find out if we can compete against those schools.”

On the rest of the NEC:

“The Northeast Conference is always, always a very competitive and tough conference. The previous two champions finished last in the coach’s poll prior to the season. I was hoping we would be last but they ranked us third. It’s competitive, but we open up our conference schedule against the defending champion Sacred Heart up there. Not an easy place to get to and not an easy place to win at.”

The team completed its first of two practices of the day this morning.  Be sure to check back on rmusentrymedia.com throughout the week for features, stories, and highlights surrounding the team.