Quick Hits: Men’s basketball impresses in their first game at the NAC 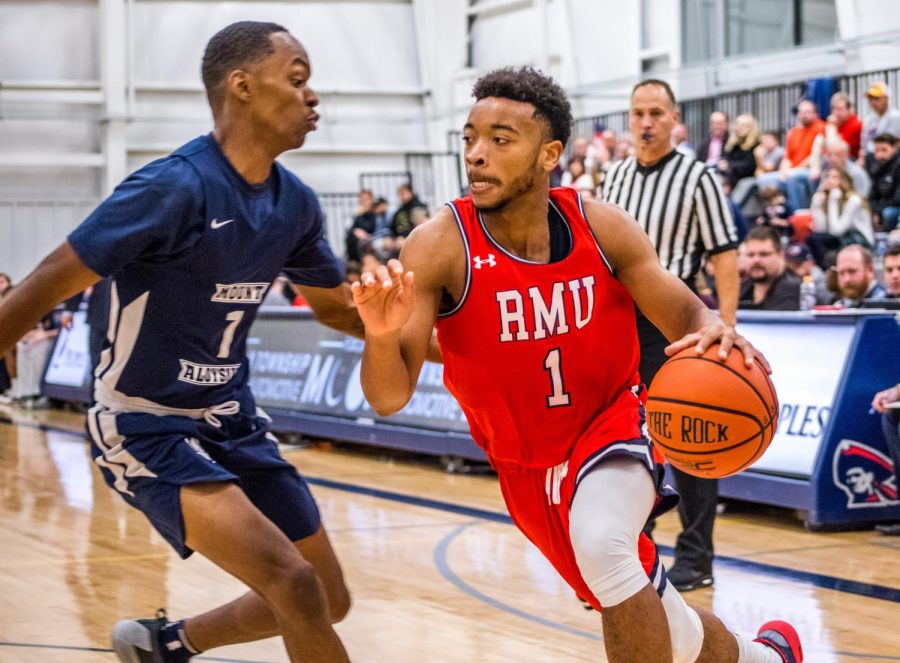 MOON TOWNSHIP — The Colonials (1-2, 0-0) dismantled the Mount Aloysius Mounties (0-1, 0-0) by the score of 104-57 in the Colonials’ home opener Wednesday night at the Student Recreation Center at the North Athletic Complex.
Why it happened
The Colonials played great defense and were 22-for-43 from behind the three-point line. Those 22 made three pointers broke the record for the most made three pointers in a single game in RMU history.
What it means
The Colonials shot well from behind-the-arc and looked untouchable. As the NEC season approaches, Robert Morris hopes to continue this momentum. In the crowded Student Recreation Center, the crowd was a factor and the Colonials seemed to play off of their energy.
Who starred
Josh Williams went 15-of-25 from three-point and scored 49 points in his Robert Morris home debut. He
also set a Robert Morris record for most three-pointers made in a game. Julian Stover led the Mounties
with 24 points while converting 16-of-17 from the line.
Who stumbled
Last year’s NEC Rookie of the Year, Koby Thomas, struggled to find the basket in the game. He shot 2-of-6 from the field. The team also struggled to hold the ball in the second half after a strong showing in the first. After only having two turnovers in the first half, the Colonials had total turnovers in the second half.
Who was there
One thousand and sixteen people came to Robert Morris University to watch the Colonials. The Colonials sold out season tickets this season and are only allowing 200 students into each game.
Who is next
Robert Morris will take on Mississippi Valley State (0-3) Saturday night at the Student Recreation Center. The Delta Devils are coming off a 94-59 loss to Utah State (3-0).