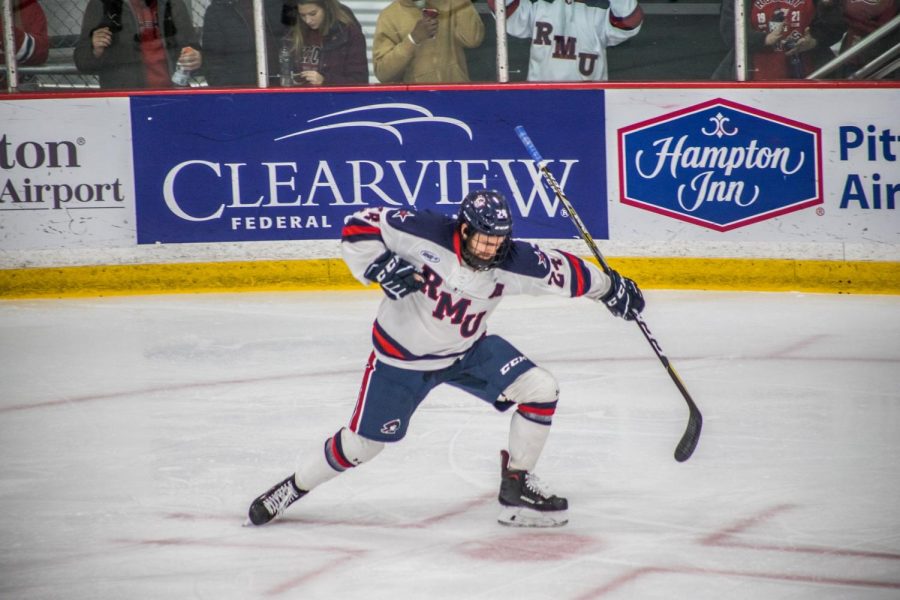 The Robert Morris Colonials men’s hockey team (3-6-1, 2-3-1 AHC) looked to rebound against the Penn State Nittany Lions (8-1) Saturday night at Colonials Arena. Despite keeping pace early with the Nittany Lions, RMU couldn’t hang on and a string of penalties sealed the game early with Penn State emerging 11-6 victors.
How it happened
RMU, despite falling behind early 1-0 bounced back into the contest on a Luke Lynch tally to tie the game at one. The two teams would then exchange goals back and forth to tie the contest at three heading into the first intermission. However, from the second period onward, RMU seemed to fall flat, as they were outscored 5-1 in the middle frame en route to the loss.
What it means
With the loss, Robert Morris drops to 3-6-1 overall. The Colonials will take a much-needed break over the Thanksgiving holiday before suiting back up to face in-state I-79 rival Mercyhurst at Colonials Arena on Friday, November 23rd before traveling to Erie the following day for the rematch.
Who starred
The Nittany Lions’ Nikita Pavlychev and Evan Barratt starred in this game. The two were offensive juggernauts on the ice for almost the entire night, with Pavlychev notching two goals on the night, and Barratt getting his on a scorching one time shot from the near side.
Who stumbled
The RMU power play and offense, while good early on, eventually slipped away at the start of the second period. After giving up an early goal that put Penn State back in the lead 4-3 just 7 seconds in, RMU seemed to forget their style of hockey that they had played the previous 20 minutes, as they took multiple unnecessary penalties and lapsed on defensive coverage. This led to several of the Nittany Lions’ many strikes in the back of the net.

In addition, the goaltending situation was back and forth all game, with starter Francis Marotte and backup Reid Cooper being swapped out multiple times in the second and third period, with Cooper letting up two crucial goals that would ultimately put Penn State ahead for good.