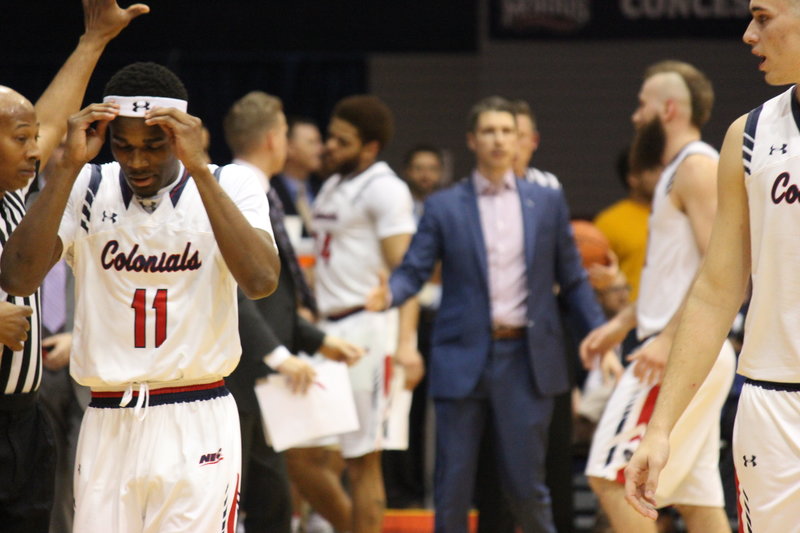 The Robert Morris Colonials faced off against the Saint Francis Red Flash in another conference match-up — the end of a three-game home stand — and the Colonials ended it in disappointing fashion. They lost the game by a score of 77-57.

Early on, it was apparent that this contest was going to be a good one. After being down 12-5, the Colonials showed their grit and went on a 21-8 run to take a 26-20 lead.

This truly was a game of runs as Saint Francis went on one of its own. The Red Flash scored eight unanswered points to regain their lead with 3:26 left in the first half.

The first 20 minutes ended with SFU leading 36-30. Josh Nebo and Isaiah Blackmon led the way for Saint Francis in the scoring department with eight each.

Matty McConnell paced RMU players with nine points, all of which came from beyond the arc (3-of-5). RMU surely needed this from McConnell. In his last five games, he shot just 4-of-20 from the three-point line. Aaron Tate was also able to contribute four points and five rebounds for Robert Morris.

The second half started with a made three pointer by SFU point guard Jamaal King. And in less than two minutes, the Red Flash’s lead ballooned to 11. Not too long after that, though, Robert Morris scored seven straight points to cut the deficit to 41-37.

The game of runs continued until SFU got a strong hold on the game.

With about nine minutes left in the game, everything that was good started to slip from the Colonials. They saw the deficit increase to nine, then to 11, and then finally to 20.

It wasn’t until under three minutes to play that coach Toole decided to have their players put on a full court press. By that point, it was too late.

Both RMU and SFU have their fair share of athleticism on their rosters. Ultimately, the Red Flash showed why they were far superior in that aspect. From the countless put-back layups by Nebo to the staggering 58 percent shooting from the field, Saint Francis couldn’t be stopped.

Robert Morris head coach Andy Toole echoed his team’s frustration after the game. “Saint Francis beat our butts; we can’t seem to figure it out.”

There was a stretch where RMU went a full two minutes without allowing an inside basket. Unfortunately, not much of the same came after that. In fact, Saint Francis turned its aggressive up a notch.

The Red Flash went from inside shots here and there to having one every possession.

Despite his near 7-foot, 220-pound frame, freshman Braden Burke was unable to stop anything that came into the paint. He and the rest of the Colonials squad allowed a whopping 46 points in the paint.

That is 60 percent of SFU’s entire score total and 24 more points than the Colonials’ paint scoring.

At the end of it all, Nebo led all scorers with 23 points on an astounding 83 percent clip (10-of-12 from the field). He also added eight rebounds and seven blocks.

McConnell topped all RMU scorers with 15 points while shooting 4-of-11 from the three-point line. Kavon Stewart contributed 12 points, four rebounds and four assists.

Isaiah Still, the team’s leading scorer, was held to just eight points on 2-of-14 shooting. This game full of mistakes for Still was purely mental, according to him.

“I’m more of a rhythm shooter,” Still said. “Tonight was just off… Ever since I injured my knee a little bit, I’ve been uncomfortable.”

Toole mentioned how he tries to insert these ideas into his players’ heads and help them help themselves. He was truly at a loss for words when it came to advising his players.

“I want a team that goes out and competes,” Toole said.

The Colonials next head to New York to face the NEC fourth-place Wagner Seahawks on Jan. 14.