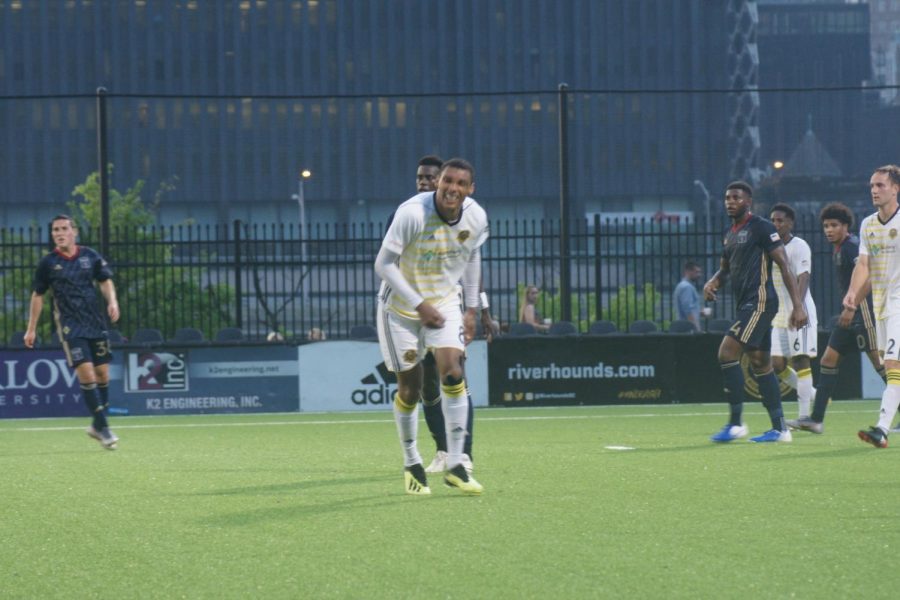 The Riverhounds offense came out strong to start the game, as for the first 20 minutes they controlled the ball 62.3% of the time and registered three shots while not allowing the Battery to get off a shot of their own. The Hounds closest opportunity came when Robbie Mertz was knocked down on a breakaway, but the referee deemed that a foul did not occur, much to the dismay of the home crowd.

In addition, the Battery were forced to use their first substitution at the 14 minute mark when Leland Archer left the game with, what appeared to be, a right leg injury. He was replaced by Vincenzo Candela, who was the only defender that the Battery carried on their bench.

The Riverhounds had another opportunity when a diving Phil Breno stopped a Kevin Kerr shot at the 33-minute mark. Shortly thereafter, the Battery’s Ataulla Guerra and the Riverhounds’ Steevan Dos Santos were both issued yellow cards in separate incidents. The score, at this point, remained 0-0.

“Charleston over the years,” said Kenardo Forbes, “they are hard to break down. They are a pretty good defensive team. They come in and they sit, so we have to be patient in and around the box.”

The second half started off quiet for both teams as they found their defensive footings. Only three total shots were made in the first 20 minutes of the second half, with the Battery registering two of them. Robert Morris graduate Neco Brett had the lone shot for the Hounds in this time frame, which came off a corner from Mertz.

Brett had another chance off a cross at the 67-minute mark when his header went wide left of the goal. Only two minutes later though did the Hounds finally take the lead as a cross from Forbes was booted in by Steevan Dos Santos. This gave the Hounds a 1-0 lead at the 69-minute mark.

“It’s always good to score,” said Dos Santos. “And when you help the team win, it feels better. Last week, I had a couple, but couldn’t score. I’m happy because today I scored and helped the team get three points.”

The Hounds made their second substitution at the 82-minute mark when Anthony Velarde came in for Kevin Kerr. Two minutes later, Mertz was handed the Hounds second yellow card of the night after an incident at midfield.

Mertz was subbed out in favor of Muḥammad Dabo as the officials added three minutes of stoppage time. A free kick effort by the Battery almost tied things up at the end, but the Hounds held on and prevailed with a 1-0 victory.

“I think today,” said Coach Bob Lilley, “We tried to play, we tried to keep the ball more and that’s why we had the energy to get the ball over the line in the second half.”

The Riverhounds next match will be in Nashville against Nashville SC (15-8-6) on Saturday at 8:00 p.m. Nashville SC are coming off a 1-0 loss to St. Louis FC (10-9-8). Which means that the two teams are now tied for fourth place in the Eastern Conference. The top four teams in each conference receive home games in the USL Playoffs.

The Riverhounds only have two home games left. They will take on Indy Eleven (16-5-5) on September 28th and Atlanta United 2 (6-16-5) on October 5th, both games at 7:00 p.m. The Riverhounds end their season with five of their last seven games on the road.