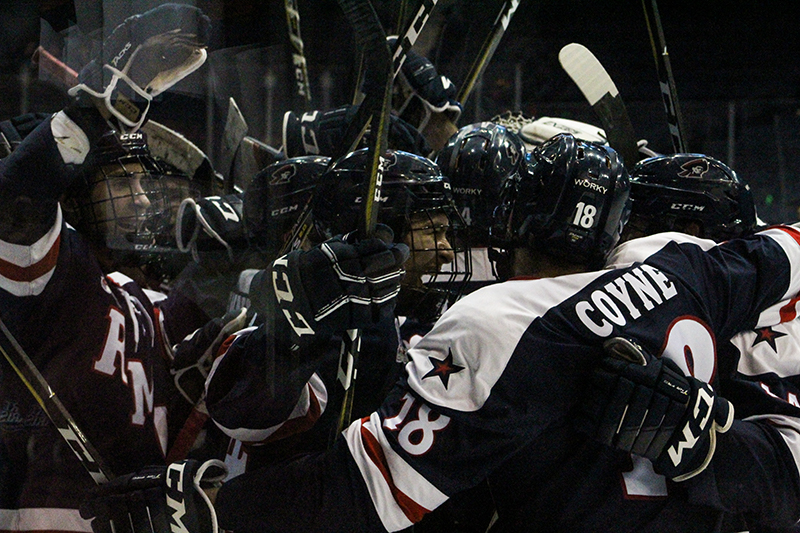 Pittsburgh, Pa. — The RMU Colonials hosted the Brock University Badgers at Colonials Arena on Sunday afternoon. The game was controlled by the Colonials but was tightly contested until the very end. When the final buzzer sounded, the scoreboard showed 4-2 in favor of the home team.

The Colonials started the second period on the power play but failed to score on that chance. Francis Marotte would stop all five shots he faced as he was replaced with Dylan Lubbesmeyer because of this being a preseason game.

The Colonials would have another opportunity on special teams but failed to get pucks to the net, and the Badgers would make them pay. With 8:20 to go in the second, Brandon O’Quinn scored 27 seconds into the Badgers’ third power-play opportunity of the night to tie the game at one.

The Badgers gave up 13 penalty minutes in just the second period alone, including a slashing and high stick that occurred just 22 seconds apart from each other, which RMU with a five-on-three power play and a chance to take the lead. Justin Addamo would do just that less than a minute later on a nice pass from Michael Louria to give the lead back to the Colonials.

“(On the power play) I’m always in front of the net screening the goalie, trying to tip the puck in or looking for rebounds,” said Addamo. “(The Badgers) were not on me a lot tonight and my teammates looked for me backside and I had an empty net.”

The second period rolled on, but right before the period ended, Ryan Burton would be called for an elbow and butt-ending with his stick which resulted in a seven-minute power play opportunity for the Colonials, with Burton being ejected from the remainder of the game.

The third period started with RMU on the power play again, but this time they had over five minutes to work with. The Colonials failed to muster up any really solid scoring chances, and in-turn failed to score on the long power play opportunity. The Badgers stepped up defensively and were getting in the way of a lot of shots, which contributed to keeping it a one-goal game.

Another goalie change for the Colonials just under halfway through the third saw Lubbesmeyer swapped out Reid Cooper (who ultimately would be credited with a win). Lubbesmeyer stopped six out of the seven shots he faced before being replaced.

Coincidental minors and an ensuing high sticking call on Nolan Schaeffer of RMU gave the Badgers a four-on-three power play, which they only needed 24 seconds to tie the game up at two.

Another late-period penalty against the Badgers gave RMU their 10th power-play opportunity of the night, and their second power-play goal of the night. With just 3:30 left in regulation, Nick Prkusic was in the right place at the right time to slip one past the Badger’s netminder that would ultimately be the game winner.

“It was kind of a broken play. I just got the puck, saw there was a lane and just shot it and luckily for me, it went in,” said Prkusic. “We have to bring everyone together, especially with eleven new guys, but we’ve made a lot of new friends and have worked well together and have to continue that going into the season.”

The Badgers would make one last effort at tying the game by pulling their goalie with just under a minute left. Unfortunately for them, a D-to-D pass along their offensive blue line was read perfectly by Alex Tonge, as he intercepted the pass and charismatically skated down the rink and put the icing on the cake to cap off a Colonials 4-2 win.

Derek Schooley, head coach of the Colonials, stated after the game, “We have to work on all aspects of our games. I was looking for us to grasp the knowledge of our system and to be able to just play hockey, and I felt we did good on a lot of that.”

When asked about translating the positives from this preseason game into the regular season, Schooley said, “We work on our odd-man rushes, and our forwards did a great job backchecking today. I really liked how we were able to play 200-foot hockey.”

RMU kicks off the regular season, at home, against No. 23 Bowling Green this upcoming Friday, and then travels to Bowling Green on Saturday.