RMU comes up short against Dayton 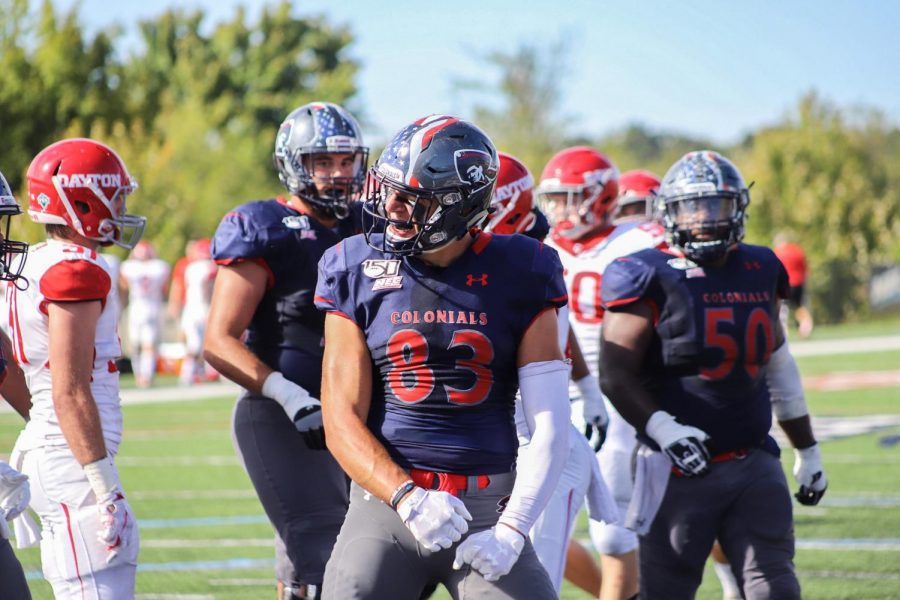 MOON TOWNSHIP– The RMU football team (0-3) hosted the Dayton Flyers (2-0) for homecoming. This was a big game for Robert Morris as they were coming off of a loss to Kentucky State last week by a score of 13-7. With a packed house of fans supporting the Colonials, they took the field looking to send their fans home happy.

Dayton won the coin toss and elected to receive in the second half. The Colonials drove down the field and on a third down from the Dayton four-yard line, QB George Martin ran it in for the Colonials, bringing the crowd to their feet.

Dayton quickly showed everyone in attendance that their offense was high powered as well. Jack Cook threw a 42-yard pass to Ryan Skibinski, which resulted in a first and goal. On 3rd and goal, Skibinski ran out to the right for a Dayton touchdown. The Colonials looked to break the tie on their next drive, but a 46-yard field goal sailed to the left. This led the teams deadlocked with a score of 7-7 as they headed into the second quarter.

The second quarter started off well for the Flyers, who scored their second touchdown on a QB sneak. This play would be reviewed, but confirmed. Robert Morris quickly drove down the field in response to the Dayton touchdown. Matthew Gonzalez and Alijah Jackson made some big plays to keep the fire lit under the Colonials. RMU had to settle for a field goal though, as Nick Bisceglia nailed a 23-yarder. This put the Colonials down by just four.

Dayton nearly turned the ball over on two separate throws during their next drive. Sam Webster ensured that Dayton would get some points on the drive by blasting a 53-yard field goal to make the score 17-10 with 8:26 left in the second quarter.

Matthew Gonzalez shined on the ensuing Colonials drive, he not only hurdled a defender but a few plays later, Gonzalez pulled in his first touchdown of the season. Dayton got inside the red zone on their next drive but ended up receiving a penalty that backed them up a few yards. RMU’s defense then stepped up and kept the Flyers out of the end zone. Webster made another field goal to give the Flyers a lead of three, this lead was taken into the second half.

Robert Morris took advantage of a penalty on Dayton’s next drive and then forced the first punt of the game. The Colonials once again failed to capitalize and they would punt for the first time as well. Tight end Adam Trautman capped off a long Dayton drive with a wide-open touchdown reception. Dayton now led by 10, their largest lead of the game at that point.

Robert Morris was able to get the offense clicking again, and a great drive concluded with an electric Alijah Jackson touchdown from 20 yards out. That touchdown once again brought the Colonials within striking distance.

Dayton struck early on in the final frame, as Cook connected with Skibinski for a 20-yard touchdown. Supilani Mailei was ejected from the game following a punch. RMU battled through some short-yardage gains and a penalty to set up a fourth-down conversion attempt. Matthew Gonzalez caught a pass from Martin, good for a 21-yard gain. A penalty drew the Colonials even closer to the end zone.

After another huge conversion on fourth down, Erik Sherkel hauled in a 5-yard touchdown. Robert Morris trailed 34-31 following that touchdown. Dayton would fumble once again, and Joe Walton Stadium was loud and rowdy.

RMU could not score though despite the great field position. George Martin was sacked on third down and knocked out of field goal range in the process. He tried to go deep on the next play but was intercepted. Dayton was able to pick up a few first downs and run out the remaining time on the clock, securing the 34-31 victory for the Flyers.

Robert Morris has many positives to take away from this game, especially on the offensive side. A few crucial stops on defense also show that thing might be coming together on that end as well. They will hit the road for their next game, as they prepare to take on VMI (2-1).