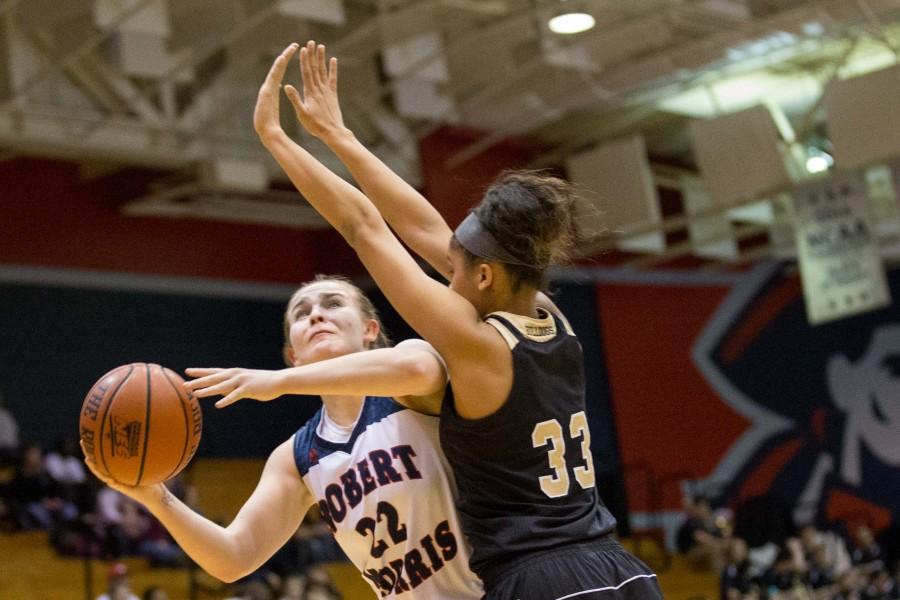 Megan Smith's 17 points helped her team take down the Golden Flashes on the road at Kent State.

Behind a defense that held its opponent to a 31.3 percent clip from the field (21-67) and an offense that continued to shoot lights out (48.9 percent, 23-47), the Robert Morris Colonials (13-11, 11-2) defeated the Central Connecticut State Blue Devils (15-9, 11-2) 60-48 for a share of first place in the Northeastern Conference. The win also clinches the Colonials at least one home game in the NEC playoffs.

“We’re very proud of the team for coming out here and being a little short handed and going out here and playing hard and getting out to a great start. They were really ready to play today and withstood a lot of runs. A lot of the freshman and sophomroes really stepped up and grew up fast for us today. This was a big win for the program. I appreciate all the support and all the students who came,” said associate coach Charlie Buscaglia.

The win comes despite two of RMU’s starters not making an appearance. Both team leader and junior Ashley Ravelli and the sharpshooting sophomore Rebecca Navarro were in street clothes as the Colonials and Blue Devils did battle in what was disclosed as a violation of team policy. Ravelli’s abscense marks the end of her streak of 85 consecutive starts for the Colonials.

Both players are expected back to action shortly.

“We just kinda had to overcome some adversity and play as a team. Other players had to step up,” said freshman Megan Smith.

Even without the two regulars in the lineup, the Colonials continued their trend of fast starts out of the gate. After starting last week’s game against LIU Brooklyn on a 21-0 run, the Colonials scored the first 10 against the Blue Devils, eventually building the lead up to 20-4 at the 11:21 mark of the first half.

They would not relinquish the lead from then on.

CCSU then responded with a run of its own, pulling to within six to make it 33-27 with under a minute to play. The Colonials responded one more time before the buzzer, when sophomore forward Judith Sole found Junior guard Lou Mataly in the corner for a triple with just five seconds left to take a 36-27 lead into the break.

“I like the zone. I think it gives us a bit of change in defense. We’ve done a lot in man this year and it’s really throwing some teams off,” said Smith.

Stamolamprou lead the way for the Colonials with 17 points, with Smith close behind with 13 as the only other player to get into double figures. For the Blue Devils, Tejahne Malone led with 17, while Kaley Watras complimented that with 11 points of her own.

Next up for the Colonials is another home contest, as LIU Brooklyn comes to town on 2/16. The Colonials are coming off of a 77-58 victory over the Blackbirds on Feb. 9. Tip is scheduled for 7:00pm.

“We’re really confident, but we have to stay humble and focus on the next game,” said Smith.