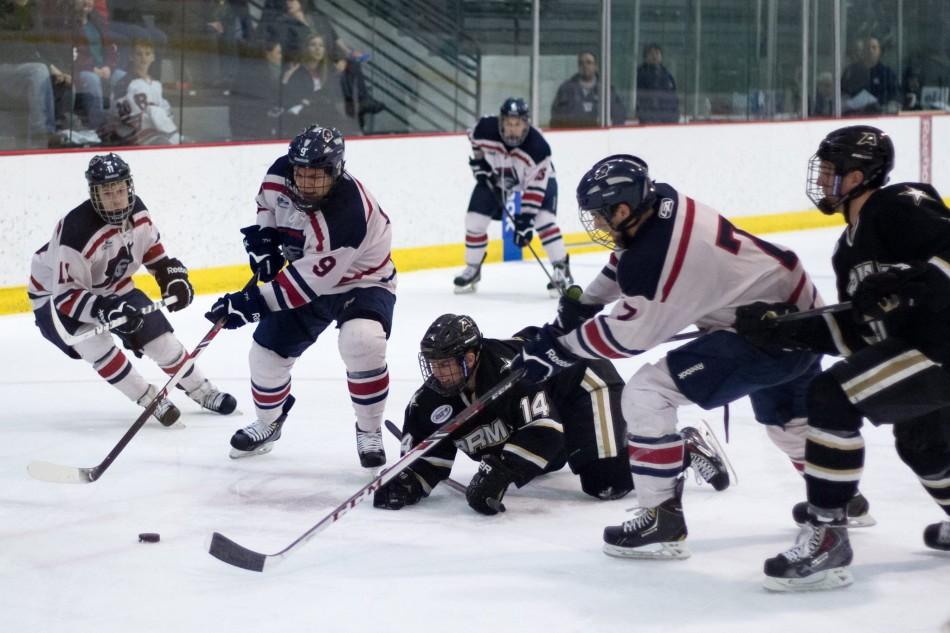 RMU defeated Michigan Saturday handing them their first loss of the season.

In its third playoff game of the weekend, the Robert Morris hockey team finished the job with a 3-1 victory over the Army Black Knights Sunday at the Island Sports Center.

The opening period was a tame one, especially compared to last night, which saw a plethora of penalties.

“We stayed out of their tactic of dragging us into physical game and we don’t play like that,” Andrew Blazek said. “We do play physical, but we’re more a speed game, control the puck, control the play, cycle, and we did that tonight and that was a big thing.”

Later in the first, Zac Lynch slid hard and awkwardly into the boards, causing a break in the action. The sophomore forward would eventually skate to the bench with some help from the trainer and to the dressing room on his own for the first intermission.

“He was the brunt of their tactics but I think one of the things that Zac did a better job of today is not getting as silly as he was last night,” said head coach Derek Schooley. “You want to play on the edge, but you don’t want to cross that line…you need to be able to play under control.”

Lynch would be rammed once again resulting in a two minute boarding call on Army’s Shane Hearn in the second period.

On the penalty kill, goaltender Terry Shafer would move out of position to retrieve a puck, a move that would prove fatal for the Colonials. Luke Jenkins would take a shot that would send the puck flying into the top corner of the net’s metal frame for the first goal of the night at 2:02.

Shafer was hunched over in pain in the aftermath of his attempted save. Trainers examined the netminder at the bench while Dalton Izyk took his spot in the cage.

Despite having only five games under his belt as a Colonial, the freshman was ready.

“Coach Schooley has good practice plans and we do a lot of battle and game situations,” explained Izyk.  “I think our team is more competitive at practice than they are at games. Every practice is a game to everyone that plays.  It’s nothing new to step in there and just get ready to go.”

The Colonials’ first goal of the night would came courtesy of Greg Gibson. Matt Cope took a shot from the edge of the faceoff circle that bounced off of Army goaltender Parker Gahagen’s pads. Gibson caught the puck on the rebound and knock it in from the slot.

Gahagan fended off a cluster of shots at the 11:34 mark until the puck would bounce in off of David Friedmann’s skate. After the goalie was on his side and the net jumped off of its moorings, the goal faced official review.

Ultimately, it would be called a good goal, giving RMU a one tally advantage.

In the final frame, Blazek finished off the scoring for the night just seconds after the faceoff. Zac Lynch would pass the puck back to the senior who would in turn send the puck straight into white netting.

Izyk would finish the contest with a total of 15 saves in his sixth game of the season.

“Couldn’t be more proud of the guy. He’s been a great backup all year, a great supporter of Shafer, works hard in practice,” said Blazek. “He’s an awesome goalie and I’m not surprised in the least at how well he did and his ability to step up at the last second.”

“We brought Izyk in because he’s a very quality goaltender…he was a guy that came off surgery, got back, and then sprained his ankle halfway through this first game and then when he came back, he struggled a little bit,” explained Schooley.

“We’ll have to find out where Terry’s status is, as far as moves forward here, but it’s so fresh and I don’t really have an update on Terry and we’ll find out as the week goes,” he continued. “But our team’s got complete confidence in Dalton and we know he can get the job done. He proved it tonight.”

After a long weekend of turmoil and triumphs, the schedule is set for RMU to face UConn at the Mark Edward Freitas Ice Forum next weekend.

“We didn’t do it the easy way,” said Blazek. “That was a hard battle of three games, physically, mentally.  To be able to contribute to the situation my senior year in my last playoffs, it’s emotional for me, but it’s good. It makes me that much more excited to go into the next series.”