With the recent resignation of RMU football head coach John Banaszak, RMU Sentry Media examines the candidates who could be the third head coach in the program's history 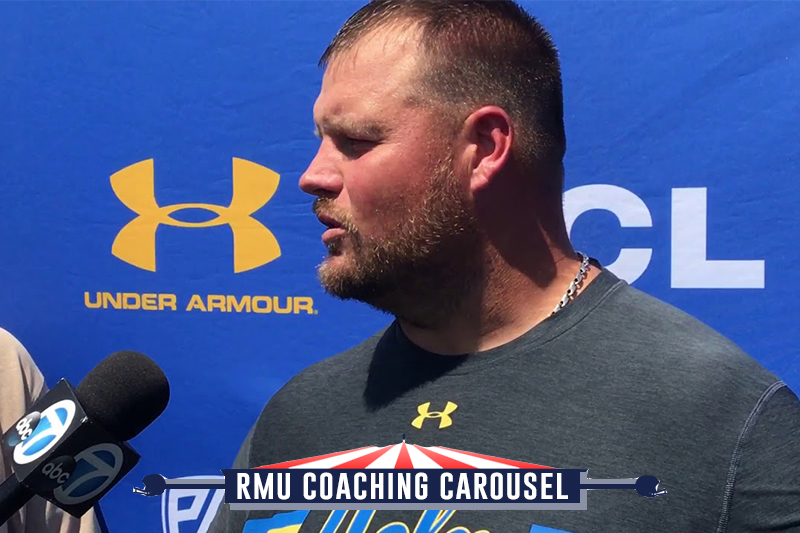 More of a wild card option for Dr. Craig Coleman in his search for a new head coach for the RMU football program, but one that should be considered, is RMU alumnus Hank Fraley.

Fraley finished up his collegiate playing career during the 2000 season at Robert Morris as a non-scholarship offensive lineman. However, he would go on to be one of the best players Joe Walton and the RMU football program have ever seen.

Fraley was a member of the All-NEC team from 1997 to 1999, and had his number 75 jersey retired from the program in 2001, just one year removed from his playing days at RMU. In 2006, Fraley was recognized once again for his career at Robert Morris as he was inducted into the RMU Athletic Hall of Fame, and in 2007 he was inducted into the Northeast Conference Hall of Fame.

However, Fraley’s coaching career was similar to his playing career as he went from college to the NFL. Fraley served as the assistant offensive line coach with the Minnesota Vikings from the 2014 season until the 2016 season.

Fraley then moved back to coaching collegiate football when he was hired to join Jim Mora’s staff at UCLA as an offensive line coach. This where Fraley’s name comes into play in the hiring options for Dr. Coleman.

One may ask, even though he is only an offensive line coach at UCLA, why would he move to coach an FCS team? Well, it is uncertain Fraley’s state at UCLA’s due to Jim Mora being fired from his duties as the head football coach at UCLA.

It seems like the right opportunity for Fraley to start a new coaching capacity in college football, a head coaching position.

Fraley has experience in both college and professional experience, in not only playing but coaching. This would be a great attribute to have for the RMU program.

Also, I bring up Fraley’s name due to his specialty, the offensive line, and if you have watched RMU football the past four seasons, you should have picked up quickly that the offensive line struggled. They struggled to protect the quarterbacks and make holes for the running backs.

You can also argue that RMU’s offensive line struggled due to injuries and then having to rely on the young offensive-line replacements, but Fraley would be an intricate part to his offensive line if he were the head coach.

Fraley could even bring one of his coaching mates from UCLA or one with whom he coached in the NFL. Needless to say, Fraley would have connections to former coaches and players he coached who he could bring to RMU who have professional or FBS experience that could bring RMU football back to where it was when Fraley played at RMU.

He may not seem like the front-runner for the job or the obvious choice by any means when looking at the other possible candidates, but by no means should Dr. Coleman and RMU not consider or look at Hank Fraley to take over the RMU football program.