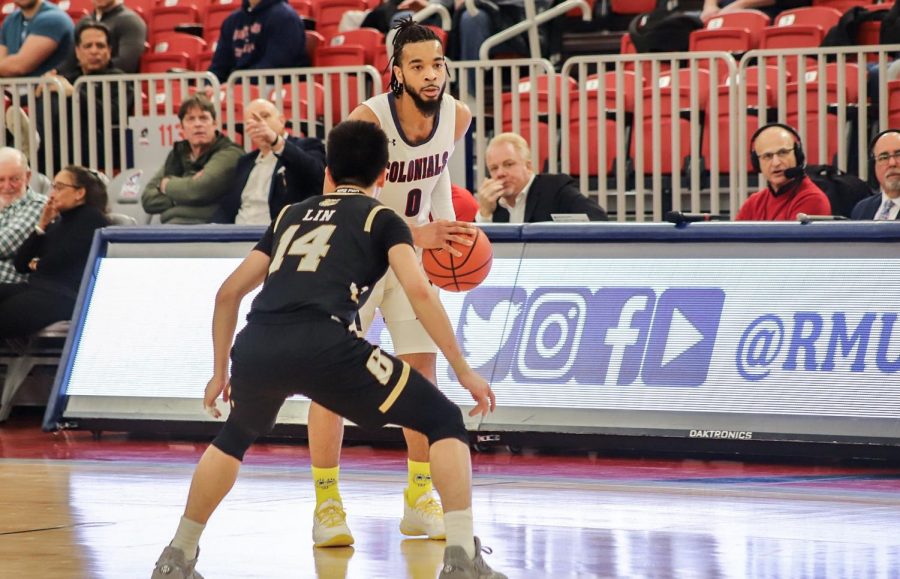 MOON TOWNSHIP– “It ain’t over till it’s over.” That was the theme for tonight’s game as the Robert Morris University Colonials men’s basketball team (11-11, 7-2 NEC) took on the Bryant University Bulldogs (11-10, 2-6 NEC).

Before the game began, the Robert Morris University Colonials did a tribute to the nine lives lost, including Kobe Bryant and his daughter, Gianna, in the helicopter crash on Sunday.

The game was well very underwhelming in the first half, as no team could get any sort of momentum going. Both teams made mistakes and turned the ball over too frequently.

However, it was a strong defensive first half for both sides with no effective offensive forces for either team. The Bulldogs only shot the ball 20% in the first half to RMU’s 30%.

“We did not hit our shots that we wanted to, but the guys kept saying we will find a way to win. Keep guarding, keep pushing, we got this,” said head coach Andy Toole after the game. “The type of locker room atmosphere we have here is second to none, every guy is interested in what we do and they all pick each other up no matter what the score is.”

Jon Williams also said, “Every guy in this locker room has each others’ back, I know that I can trust anybody to have my back on the help side because we all trust each other and we have a great bond like no other team.”

RMU was able to push through the adversity and pull away, 26-17, by the end of the first half.

“I kept looking at the basket and seeing if it fell in the peach basket and we had to take the ball out, but in all seriousness, we were able to get some shots to fall at the end of the first half and we just never looked back,” said Toole.

The second half, however, provided a spark to the game that it desperately needed. Sophomore Dante Treacy came out strong and hit two big threes to get the team going.

Both teams traded some tremendous possessions, and it was a fast and furious start to the second half. The Colonials jumped out to a 31-19 lead when Bryant suddenly went on an 11-0 run.

“Bryant was able to get us out of rhythm and were able to make a run on us to get back in the game,” said Toole.

During this intense action, AJ Bramah got called for a flop. When asked about it, Toole said, “I really didn’t understand why they called that, I have no words.”

Coach Toole earned himself a technical foul in the end, which the large Colonial crowd was not happy with. A wild second half ensued, but the atmosphere was really different. People were getting involved in the game, and it started to give RMU life again.

The Colonials went on a 7-0 run, and they would not look back from there, pulling out a 64-54 victory over the Bulldogs.

All and all RMU played a really scrappy game. They went after every ball and did not lay off the gas pedal the whole game.

Josh Williams had 21 points for the Colonials, and Bramah had a double-double with 14 points and 16 rebounds. For Bryant, Micheal Green III had 12 points, and both Adam Grant and Charles Pride had 11.

RMU returns on Saturday at 1 p.m. to face off against conference rivals the Central Connecticut State University Blue Devils (2-21, 1-9 NEC) at the UPMC Events Center.

Editor’s Note: The story originally stated that Kobe Bryant passed away in plane crash. The story has since been fixed.