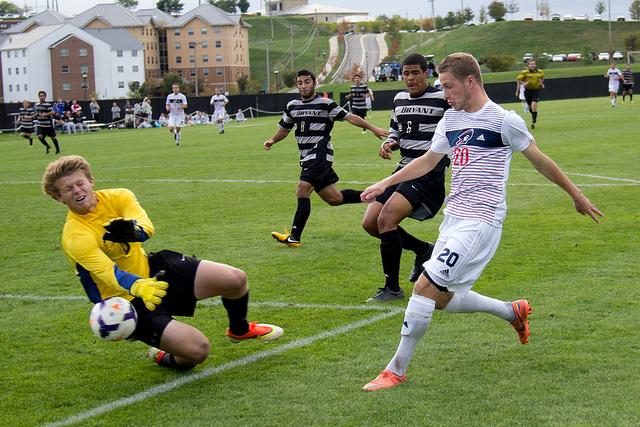 Although the Robert Morris men’s soccer team is off to one of its best starts in program history, the Colonials were unable to remain unbeaten at the North Athletic Complex after a 1-0 loss against the Bryant Bulldogs.

RMU came into the match with a 5-3-2 record, and although both teams were evenly matched, it was a defensive game.

During the first 45 minutes of play, there were no goals scored by either teams, as both defenses look relentless.

Max Shinsky, Alec Brumbaugh, and Sam Colosimo anchor an RMU defense that has only allowed seven goals in 10 games played this season and held the Bryant offense to only four shots on goal in the first half.

Unfortunately, freshman goalkeeper Joseph Kuta’s only mistake was giving Bryant a second chance opportunity, which turned out to be the deciding factor.

The Bulldogs’ Ryan Kalan capitalized on the rebound, notching the only tally of the afternoon.

Though it was primarily a defensive game, the RMU offense made the game interesting with five shots on goal in the first half and three shots in the second half.

Despite the loss, the Colonials hope to keep their confidence up when they take on Fairleigh Dickinson on Sunday.