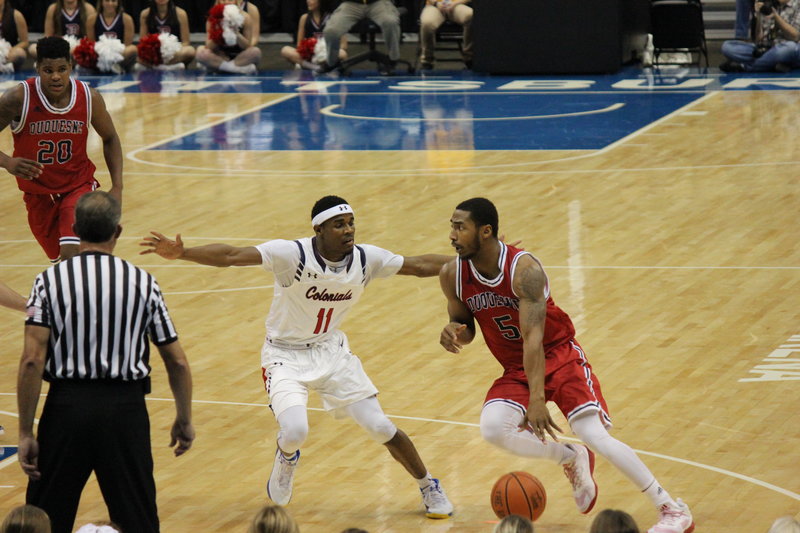 The students were roaring as RMU basketball played its first ever regular season game in PPG Paints Arena. A downtown environment and a backing from hundreds of students proved to be enough for the Colonials, as they were able to walk away with a 64-60 victory over the Duquesne Dukes.

The first bucket of the game was a 3-pointer made by Duquesne guard Emile Blackman. The Dukes took the 3-0 lead, but that was subject to change. In the first half alone, there were an astounding 11 lead changes and six ties.

It was a back and forth contest throughout most of the first half until there was about a minute left. Started by a pair of free throws made by Isaiah Still, the Colonials went on a 5-0 run at the end the half.

This run pushed them to a four-point lead going into the last 20 minutes of play.

The Colonials picked up right where they left off to start the second half. An Isaiah Still three ball followed by a Matty McConnell jumper gave Robert Morris a nine-point advantage just minutes into the half — its biggest lead of the game.

The Colonials proved why their defense is among the best in the Northeast Conference. They didn’t allow Duquesne to score a single point for two minutes to start the second half.

The second half was full of loose balls, turnovers and fouls. The RMU fans at PPG Paints Arena disagreed with several calls from the officiating crew. Nonetheless, the game was close when it came down to crunch time.

With 1:43 left in the game, the Dukes were up 57-56. With 55 seconds on the clock, RMU guard Kavon Stewart hit a layup to take back the lead and provide one of the three lead changes within the final minute of regulation.

Duquesne took the lead on its next possession on a contested layup. Isaiah Still then decided that the Colonials were not going to lose this game. He did what any leader would do in this situation.

He drove to the lane and hit a tough layup to the give the Colonials a 60-59 lead with under 20 seconds to play. Just as it appeared Duquesne was about to get an easy bucket, Still swooped into the lane and blocked the potential game-winning bucket.

Then, freshman guard Clive Allen stepped up for his turn at heroism.

Intentional fouls were a must if the Dukes wanted a shot at victory, so they fouled the 60 percent free-throw shooter in Allen. He promptly hit four free throws in the last 10 seconds of the contest to give RMU the four-point victory, 64-60.

Still finished with a game-high 22 points on 53 percent shooting. He also knocked down 4-of-4 shots from three-point range.

Another positive came from RMU’s starting point guard. Stewart is starting to find his rhythm as the season progresses. In this game, he scored 12 points on 50 percent shooting from the field and grabbed a pair of steals.

Overall, it was a strong and impressive outing for the Colonials. They will look to ride this momentum going into their next game. RMU (3-7) faces off against the Oakland Golden Grizzlies (8-1) on Dec. 10 inside the Charles L. Sewall Center.