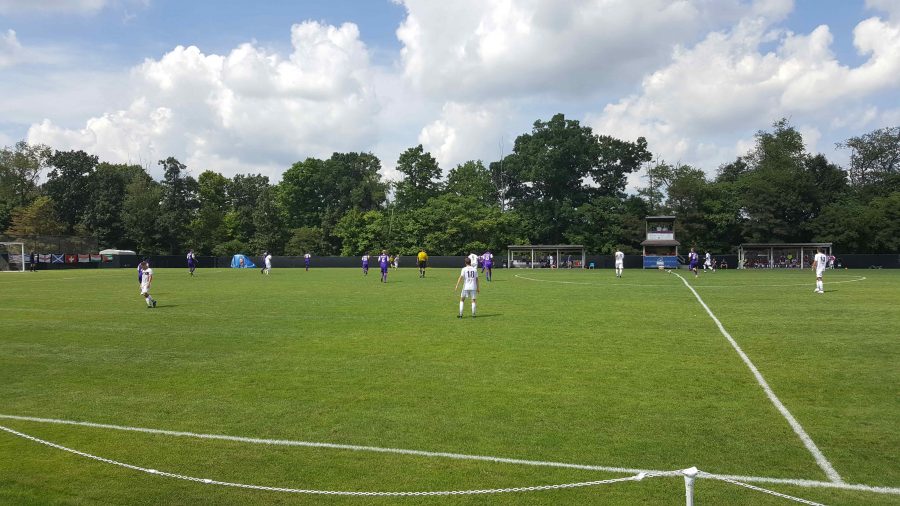 In a year when the Robert Morris Colonials men’s soccer team is looking to it’s youth, the Colonials first game ended in an upsetting 4-0 defeat against Niagara University on Friday.
The Colonials began the game looking fresh and ready to get a win on the pitch. With one of the largest crowds of Colonial Crazies at the opener, things were looking optimistic.

The tides were quickly shifted to one side however when in the eigth minute of the match the Purple Eagles were able to draw a controversial red card. It was issued off of a breakaway chance in which starting goalie for the Colonials Winter Fondi dove for the ball but ended up clipping the feet of the attacking player.

Kiski Area native Matt Bisceglia would come into net to make his debut for Robert Morris. As if there wasn’t already enough pressure on him, Bisceglia would have to face a penalty kick fresh off the bench. He was able to muster an incredible save off the PK, but Purple Eagles Shiquan Lowe was able to capitalize on the rebound and put it in the net.

Now down a man, barely a minute later the Colonials let up another goal, this time from Mackenzie Roach capitalizing off of a poor defensive effort coupled with a quality cross from Solorio Absalom.

Absalom was able to add to the tally with a goal of his own in the first half to make it a 3-0 game heading into the locker rooms at the end of 45 minutes.

The Colonials did come out in the second half looking better with their touches and possession, but their defense and their shooting looked much of the same. They gave up a fourth goal from simply being outran to leave the final score at 4-0.

Regardless of the poor outcome, the Colonials did show hopes of a quality season to still come ahead. It seemed like there were a lot of bright spots on the pitch throughout the game, but the teamwork is just not there yet. This is to be expected though with such a new squad of players working together.

PLAYERS TO WATCH FOR THE REST OF THE SEASON:

#22 Bayley Winkel – Winkel is a transfer from Drexel University, and was also a member of Toronto FC’s academy team. On Friday he was able to show off his quickness as well as his quality touches when given the opportunity.

#14 Eddie Thomas – Earning himself a few starts last season, Thomas is back and looks like he’s ready to be a big contributor on defense this year. His play on the pitch on Friday showed nothing but hard work and a few very impressive stops.

#11 Zac Sherman – Sherman ended last season as quite a surprise to the Colonials tallying five points in the month of October. He didn’t get many opportunities on Friday and only played for 33 minutes, but look for Sherman to help lead the Colonials front line throughout the season.

The Colonials continue their home stand on Sunday against Cleveland State at 1:oo p.m.