RMU power play continues to impress in loss against Army 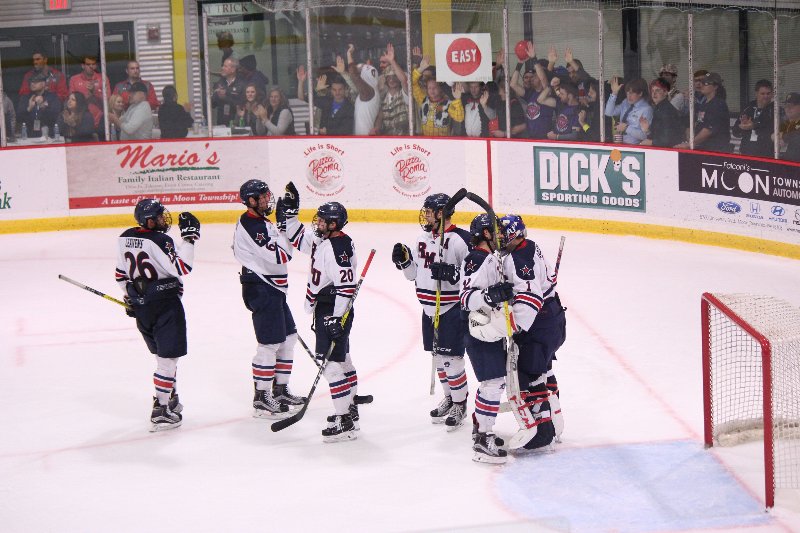 The Colonials dropped game two against Army, 2-1, but there was some good coming out of the heartbreaking loss.

The Robert Morris power play has been impressive this entire season. In every game so far, the Colonials have been able to capitalize at least once on the power play. This time, the assistant captain cashed in for the goal. Senior Ben Robillard scored while crashing the net looking for a rebound. He found it and put it home.

Army marched to victory despite a comeback effort by RMU late in the third period. It was a very physical game with a lot of penalties and three goals between the two teams.

The first period ended scorelessly; however, there was a significantly physical and angry feeling in the air. The first period of the second game seemed like the fourth period from the game on Oct. 29. The way Army and RMU came out and immediately picked up where they left off on Friday was impressive.

There was no delay, the puck dropped and both teams started throwing the body.

The second period showed some scoring, just like the game prior. Army put up two goals in the first three minutes of the period, catching the Colonials sleeping. Army goals came from Zach Evancho on the power play and Brendan Soucie at even strength.

Robert Morris found its game once more after the second goal, but could not capitalize that period. At the end of the period, a scrum between Luke Lynch and Blake Box escalated into a line tussle. Lynch and Box got two minutes each in the box for roughing.

The “Colonial Period” proved to be a scary one. At 12:48 remaining in the third, Lynch went down into the corner to get the puck, and he made a critical error. Lynch’s head was down when he went in to get it and got demolished by Army’s Mike Preston.

Preston received a five-minute major for boarding, which after a brief discussion, led to a game misconduct and Preston was ejected.

Lynch lay on the ice for a few minutes as the trainer made his way and tended to him. Lynch eventually made his way back to his feet and proceeded to the bench. After being checked out by the team doctor, he was cleared to return.

Not ten minutes later, Lynch got hit again. Just a brutal but clean, and he got back up and continued play.

With 4:27 on the clock, Ben Robillard scored on the power play to cut Army West Point’s lead in half. The 84 Lumber Arena was rocking as the goal horn sounded.

The Colonials took control of the game and kept the puck in the offensive zone for the last five minutes. With Marotte going to the bench with one-and-a-half minutes to go in the game and RMU on the power play, the air was tense.

Though, Robert Morris could not capitalize and the game ended 2-1 in Army’s favor. The Colonials will travel to Ohio on Nov. 4 before returning home Nov. 5 to play the Ohio State Buckeyes in a non-conference match-up.