RMU reaches near perfection against Canisius 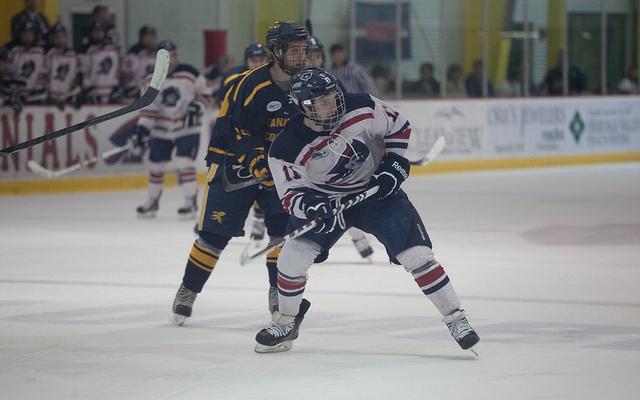 In a home-and-home series, the RMU men’s hockey team started the first game of the weekend from the bottom.

However the Colonials would adapt and eventually run the game, defeating the Golden Griffins, 4-1, Friday night at the Island Sports Center.

The first period may have been scoreless, but there was no shortage of excitement. Neither team seemed to have the upper hand as the puck shifted from zone to zone. Shots were nearly even by the end of the first as RMU had 12 and Canisius had 13.

Both the Colonials and the Golden Griffins showed muscle, grit, and ferocity in the first 20 minutes of play. Scrums littered the opening frame, but the aggression reached its peak over halfway through the period.

It was then that pushing and shoving commenced and didn’t let up until the 12:32 mark. Patrick Sullivan and Greg Gibson each received two minute unsportsmanlike conducts and 10 minute misconducts. Jack Hidi of Canisius and Jay Llewelyn would serve the penalties.

“Canisius tries to draw you in. That’s part of their game,” explained defenseman Tyson Wilson. “They’re one of the bigger teams in the nation so it’s a strategy for them almost, to try and pull us in like that and we [had] to stay away from that stuff and play our game.”

After a tripping call on Evan Moore, RMU’s penalty killing unit took to the ice and showed some serious hustle. Countless scoring chances were generated, the most promising being Brandon Denham’s two-on-one rush, which led to a shot that would unfortunately hit the post.

Despite these efforts, Canisius would dent the scoreboard first as Braeden Rigney’s backhanded shot found the back of the net at the 9:32 mark.

The final period of the game would bring a better, more focused Colonial hockey team out of the dressing room. Though the Golden Griffins would continue to apply pressure, four goals would be tallied.

First, there was Tyson Wilson.

35 seconds into play, Scott Jacklin sent the puck to Wilson who would backhand it to the top of the net.

“I knew I was struggling in the second. I knew I had to step it up and try and be a leader, show the guys we can’t play that way and I just got a good pass and finished,” said the defenseman.

Next came Jeff Jones, who was in a perfect position in the slot.  His shot would send the puck to the side of the goalie and past the line.

“Coach told us to start forechecking harder, so that’s what we did,” said the junior. “We went in on the forecheck and I saw an opportunity to pick a spot and then I did and I just let my instincts take over and thankfully it went in.”

The Colonials’ penultimate goal came courtesy of Zac Lynch. Jacklin would get the puck to Cody Wydo, who in turn sent it across the front of the net to Lynch for the tally.

Greg Gibson netted the fourth and final goal for the Colonials when he raced down the boards and sent the piece of vulcanized rubber into a vacant Canisius net.

“It was a chippy hockey game and we got involved in it and we can’t get involved in a game like that, we need to make sure that we play, worry about the job that we do and that’s playing hockey,” said head coach Derek Schooley.

“I think I snapped a little bit in between the second and third period and tried to keep them away from that,” he continued. “I said, let’s go out and play hockey and play with a sense of urgency and play as hard as we possibly can and our guys did that. They were very good in the third period.  I wouldn’t say a perfect period, but pretty close.”

Tomorrow night RMU will close out the weekend series in the Golden Griffin’s domain.

Jones predicts that much of the same will be seen tomorrow.

“I think they’re going to try to throw us off our game early,” he said. “As long as we stay to our game we’ll be successful and come out with another W.”