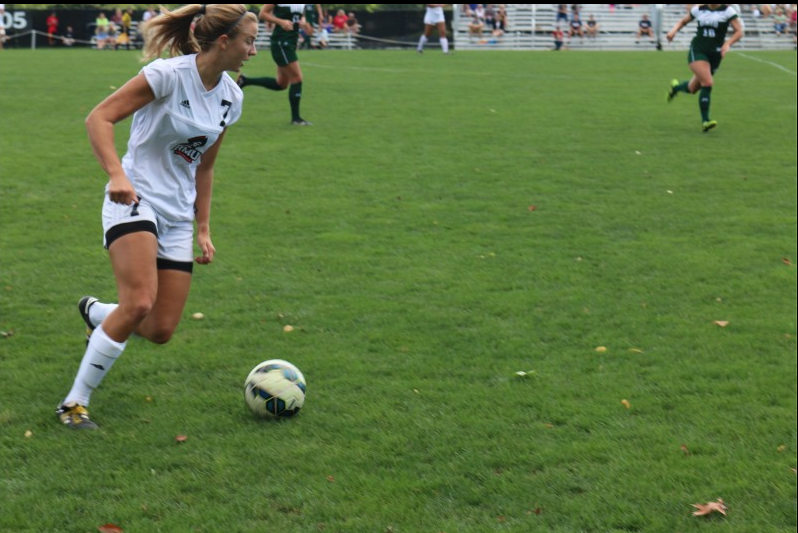 The Robert Morris women’s soccer team hosted the LIU Brooklyn Blackbirds on Friday. The Colonials outlasted the Blackbirds to grab a 1-0 victory for their first Northeast Conference win of the season.

The lone goal was scored by Jane Schleicher, assisted by Kasha Bak, and was scored just eight minutes into the game. It was also the first shot the Colonials took of the contest.

Despite being out-shot in the first half, 12-6, the Colonials lead never felt tested. A few minutes into the game, LIU blew a chance to take a 1-0 lead after a corner kick turned led to an incredible Mackenzie Shearson save. That save by Shearson was her first of eight total on the day, and set the tone for the rest of the game.

Robert Morris’ defense shut down the Blackbirds’ struggling offense after that, only giving up a few more chances — including a shot, again by Gomez, that smacked the crossbar right before halftime.

The second half was much of the same for RMU. LIU Brooklyn came out more aggressive, but the Colonials looked stronger. The Blackbirds would again lead in shots, 7-5, but neither team found the back of the net.

LIU led the Colonials in shots by a tally of 19-11, with nine of the Blackbirds’ shots being on-target — compared to just four for RMU. The Colonials now stand at 1-3 in NEC play and 3-11 overall. They will travel to Maryland to face Mount St. Mary’s on Oct. 16.