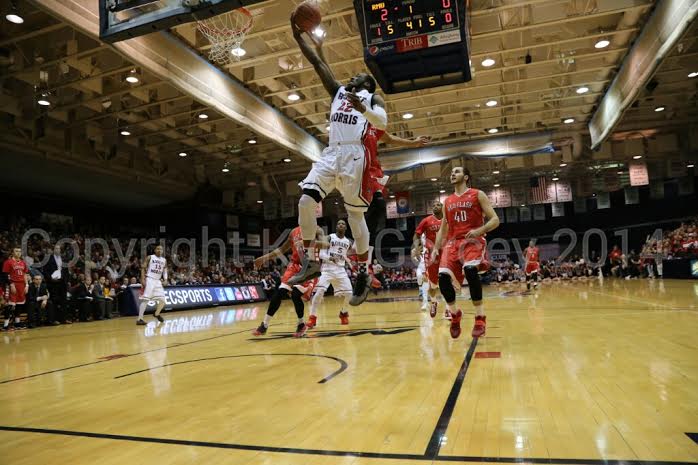 The Robert Morris men’s basketball team had its worst offensive first half of the 2013-14 season on Saturday in the Northeast Conference semifinals, mustering 15 points on a 7-28 performance from the field.

But while RMU struggled to put the ball in the basket during the first 20 minutes of play, so did Saint Francis (Pa).

“When I went in [to the locker room] I said ‘it doesn’t matter if its 5-0, 20-15, 70-65, it’s still five points,’” said head coach Andy Toole. “And so as poorly as we played offensively, we defended well enough to give ourselves a chance, and that’s exactly what you can ask for out of a situation like that.”

However it would take 9:24 for the Colonials, who went 0-13 from the floor during that span, to put another point on the scoreboard. Though despite Robert Morris’ offensive drought, the Red Flash didn’t fare much better.

“We felt like they played a very good half on their end, in terms of taking away things that they wanted to stop us from doing offensively,” said Karvel Anderson. “They got us out of our rhythm a little bit and once we were in the locker room we told each other it wasn’t going to be like that in the second half, our fans were going to keep us going and we just had to pick it up.”

And that’s exactly what happened.

Anderson, who was held scoreless in the first half, came out firing in the second, draining his four shots from the free throw line en route to a 21 point performance.

Despite the fact that the Colonials led by 12 with nine minutes remaining, SFU battled back and cut the deficit to one with 1:35 left.

That’s when Dave Appolon, who scored the game’s first four points, took over.

The junior guard came down with an offensive rebound off of Anderson’s missed trey and went 3-4 from the line in the final minute to give RMU a 60-57 cushion.

Though despite being ahead by three with 21 seconds left, Toole chose not to foul SFU, electing instead to force Malik Harmon to heave a 35 foot shot as time expired after Anderson poked the ball away.

The freshman’s shot hit the left side of the rim and bounced out, securing a RMU’s date with Mount St. Mary’s in Tuesday night’s title game.

“I feel like it [playing Mount] is the perfect ending to the story. I feel like they kind of got us last year, so I think this year it’s our turn to hit them where it hurts in the final game of the tournament,” Anderson said. “There’s no better way to end what the Crazy 8 has been through to end it going through Mount.”