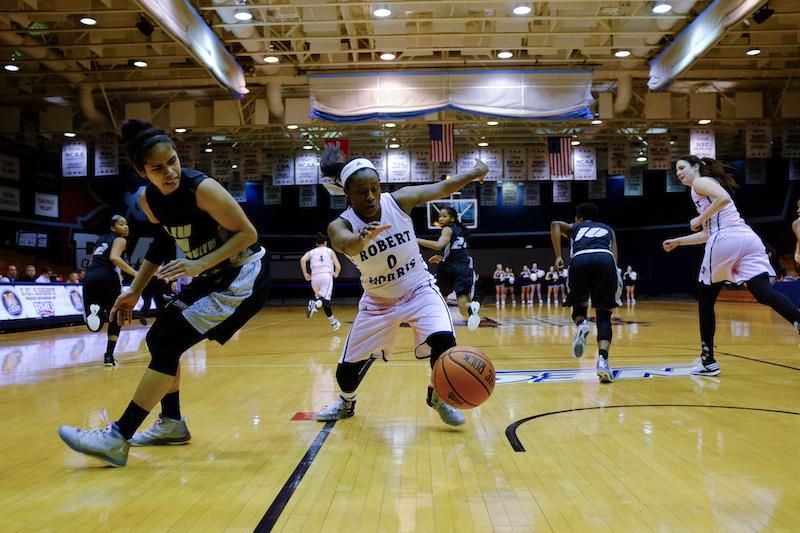 The host Colonials again used stifling defense to garner a victory, forcing 22 turnovers that resulted in 21 points, which mirrors the margin of victory. While they held their opponent to just 37 percent shooting (17-46) they also used their noticeable size advantage to outscore the visiting Blackbirds in the paint, 28-18, out rebounded them 44-28, and generated 12 more second chance points.

“It was a hard fought victory today, we withstood a lot of runs. They came at us a few times and cut the lead to inside five. I was proud of the team for fighting back and coming up big every time they made that run at us,” said associate coach Charlie Buscaglia. “We took a lot of charges, we made a lot of hustle plays, and at the end we did a good job of putting the game away by hitting shots in some big spots.”

Like the other 10 victories on the now 11 game winning streak, the Colonials jumped on their opponent early. After falling behind briefly 4-3, they scored the next 15 points.

This was promptly answered by three consecutive three-point field goals by the Blackbirds, making it 22-19 at the 5:00 mark of the first half. The Colonials responded quickly with a three from junior Lou Mataly, accompanied by freshman Megan Smith taking a charge to vamp up momentum for Robert Morris.

“I just try to work hard all the time and sometimes it goes in, sometimes it doesn’t. I just keep doing my thing and doing whatever I can to help the team,” said Mataly.

The Colonials added another six points before the buzzer and took a 33-19 lead into halftime, despite shooting just 39.3 percent from the field.

“It happens. When we don’t have a good shooting day we just have to work harder on defense and hustle plays, getting rebounds, focusing on other things. If we bring the energy the shooting will come,” said Mataly.

Mataly was behind only sophomore Anna Niki Stamolamprou’s 13 points with 12 of her own to help lead the Colonials. Sophomore Judith Sole and freshman Jocelynne Jones complimented with 12 and 11 points, respectively.

Jones was all over the place for the Colonials, nabbing six rebounds, three steals, and chipping in two assists in what was arguably her best game to date in her first year at the division one level.

“It’s just doing what the coaches have asked me to do,” said Jones. “They’ve been telling me to play within myself the whole season and I guess I’m just finally responding.”

The second half was again a balance of runs for each team. Long Island started the half with two quick buckets, only to have Stamolamprou drain a three, which was answered by Letava Whippy’s trey for the Blackbirds. Mikalah Mulrain then executed a traditional three point play on the other end of the floor.

The Blackbirds started the second half shooting 8-of-11 and climbed again to within three (42-39) of the lead with 12:26 left in the game. The run was quickly answered by the Colonials, who scored eight straight points over the next 3:13 to extend their lead to 50-39, putting the contest away for good.

From there the Colonials finished the final 9:13 by outscoring their opponent 17-7.

Up next for the Colonials is a pivotal road matchup with the third place Bryant Bulldogs on Saturday, Jan. 21. Opening tip is set for 1 p.m.