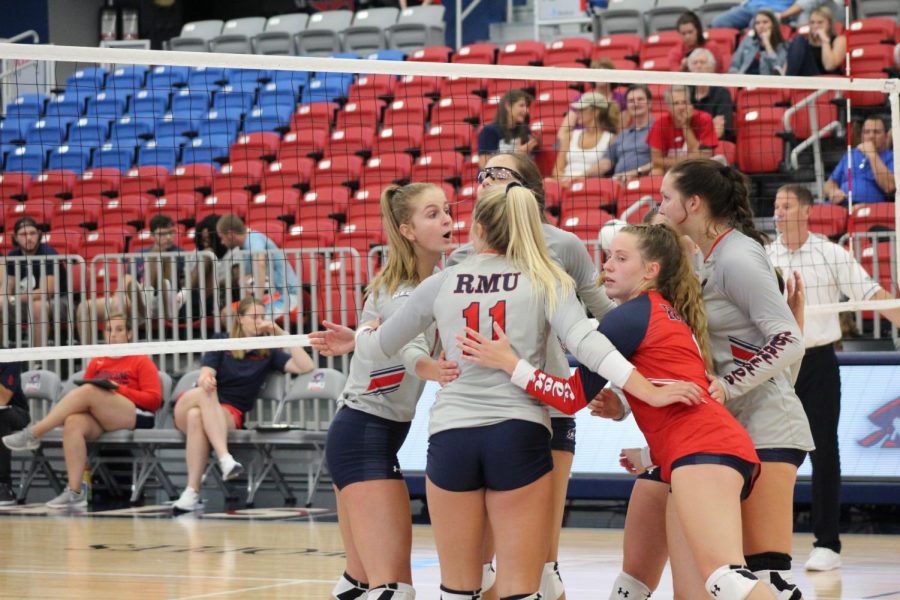 MOON TOWNSHIP– The Robert Morris and Long Island rivalry has been a sight to behold and this game did not disappoint. In their last ten meetings, both teams have split the series 5-5. This game, however, was a statement game for both teams. This win would put them on top of the NEC standings.

The big game feel was evident inside of the UPMC Events Center. This was backed up by the players on both sides, who gave it their all. “Going into the game, I felt confident and we all felt confident and we just need to stay focused, stay loose, and get this win, and we did just that,” said coach Starr. “This was a statement game for us and we came through, the girls had fun and it was great to watch them flourish in a tough situation.”

The first set did not disappoint as both teams were neck and neck, with the biggest lead being just three points. At first, both teams looked pretty nervous and tight to start the game but as the first set progressed both teams were able to let loose. RMU did fall behind 17-14 at one point in the first set, but then a kill from Emma Granger really started turning the momentum of the set. RMU came off of that kill from Granger with energy and they were brought back to life. Robert Morris went on a big run in order to win the set. Notable first set stats: RMU Kills – Granger(6), Assists – Whitney Brown(13), Digs – Zanolli(9), Blocks – Granger (1), Pts – Granger (7).

The second set was more of the same action due to the back and forth play from both sides. Neither side wanted to give up easily and each team was racking up blocks and kills. Both coaches were trying to find spots in their opponents so they could find a way to get ahead in the second set. Robert Morris eventually figured out how to find success against the Sharks. The Colonials went on an outstanding 13-3 run to close out the second set. LIU looked really uncomfortable in the second set and were allowing easy points. RMU, however, had all the momentum going into the third set and they were able to get on a hot start. Notable stats from the second set for RMU: Kills – Granger (nine), Assists – Whitney Brown (25), Digs – Zanolli (14), Serve Aces – Wilt & Brown (one each), Blocks – Alfano (three), Pts – Granger (10)

As mentioned earlier, the Colonials got off to a fast start in the third set going on a 9-5 run to start the set. “We looked really sharp especially in the third set, I was happy with how the team played and we got music bumping in the locker room and we are just having a good time,” stated Emma Granger. All in all, after the 9-5 run by RMU, they did not look back and they continued to find the one spot in LIU’s game and they kept going to it repeatedly. RMU would eventually win the third set thus completing the statement game sweep against the Long Island University Sharks.