Preview: RMU women’s hockey to start their season off against St. Lawrence 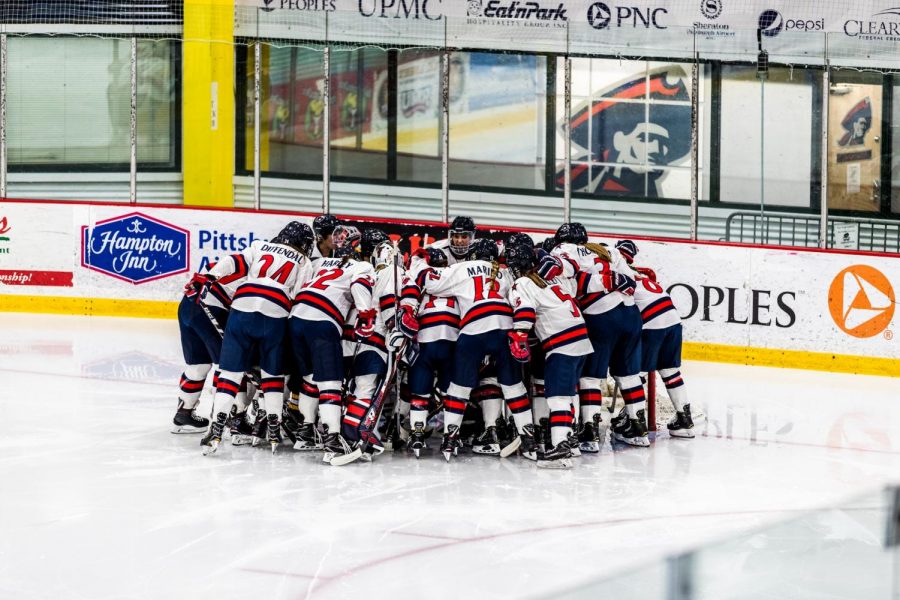 Both the St. Lawrence Saints and the RMU Colonials are ready to kick off their season opener. The Saints are making the roughly five-and-a-half-hour flight to Pittsburgh, PA for the Colonials home opener at Colonials Arena. Both of these teams were victorious in their lone preseason game. St. Lawrence defeated the University of Ottawa by a score of 4-0, while the Colonials finished a 6-1 routing of the UOIT Ridgebacks.

With the Colonials being a part of the College Hockey America Conference (CHA) and the Saints being a part of Easter College Athletic Conference (ECAC) this sets up an intriguing non-conference match-up between the two clubs, but that does not make this any less personal. With this being the first game for each team, there will be plenty of intensity on the ice as each of them try to avoid that deflating 0-1 feeling.

The two teams have not met one another in almost four years, and it was the Saints who came out on top in both contests of that year by scores of 3-1 and 8-2. With the four-year gap between the times these teams have met, this is not exactly what some would call a rivalry, but since it is the first game of the new season, the intensity should be almost equivalent or even greater.

What RMU should know

The RMU Colonials dominated all 60 minutes of their 6-1 preseason win over the UIOT Ridgebacks, scoring a pair of goals in each period, five of which came before Nicole Zabel of the Ridgebacks scored their lone tally. Offensively, the Colonials were able to line up 50 shots on the Ridgebacks’ goaltenders. They were also dominant at the other end of the ice where they allowed only 15 shots to find the net.

One power-play opportunity was enough for the Colonials as they scored on their lone chance. They found themselves down a player three times but were able to kill all six minutes of penalty time, while only giving up three total shots.

Over the last few years, the Colonials have had their way for the most part when kicking off a new season. They have a flawless 3-0 record in their last three home openers, and a 5-0-1 record when including the succeeding game. The last time they started a new season at home was four years ago, in which they lost to Bemidji State 5-2. They had a home record of 8-3-1 a season ago and will be looking to build off of that. Their conference record boasted a 14-3-3 record which was good for first among all CHA clubs. Again, the Colonials will look to build off of that from last year, but the season is new, and all records are untarnished.

The Saints boasted a 20-11-4 overall record last year, with a solid 9-5-3 on the road. Their overall record pinned them at No. 4 in the ECAC standings, which put them up against the No. 1 Clarkson Golden Knights in the ECAC tournament in which they lost 4-2.

Three of the Saints’ goaltenders combined for a 16 save shutout, in a game which senior forward Justine Reyes had three points (two goals, one assist), in their 4-0 victory over the University of Ottawa. The Saints had six separate chances to score on the power play but only managed to find the back of the net on their last attempt. Defensively, they did manage to kill both penalties as they marched their way to victory.

Jaycee Gebhard: The Junior forward for Robert Morris has played phenomenally over her first two seasons marking up 84 points in just 67 games played. She had at least one point in 12 of RMU’s last 13 games to end last season. In the last two home openers, she has tallied four points (two goals, two assists) to help RMU win in both those contests. Look for her to be a major contributor in the opener yet again as she tries to continue her point streak.

Lauren Bailey: This will be the second home opener Bailey will start in the net for RMU. Last time she was in the net during a home opener RMU won 6-3. Bailey holds a 10-7-2 career record, and in 26 games played she has a career save percentage of .905 with a goal against average of 2.84. She will be looking to bounce back from last year’s totals of 3.74 GA/AVG and a .857 SV%, which were both career lows. Look for her to come fired up and ready to prove something.

Kirsten Welsh: Experience is key to any situation and Welsh backs that statement up. She is coming off of career highs in points (30), goals (12) and tied her total in assists (18). If she plays well, the players around her will play well. It will be up to Welsh and fellow senior defender Maggie Lague to keep the Colonials emotions under control and stay away from the penalty box, and just focus on their game.

Justine Reyes: The Senior forward for the Saints had three points in their preseason win, and tallied 38 points in just 34 games a season ago. She had career highs last season in both goals (17) and assists (21). Reyes is very well tempered on the ice having only served 18 penalty minutes in her three years thus far. Look for her to be on the ice for the majority of the weekend. Reyes will be creating offensive opportunities and elevating the gameplay of her peers.

Both the Colonials and the Saints are coming off great seasons. There are still many unanswered factors before a game, but there is an upside in favor of RMU. Gebhard has been stellar in home openers thus far in her career and will be looking to extend her point streak. Even with losses of their senior players from last year, they have plenty of seniors, juniors and even sophomores this year who seem to be ready to step up and take their place. Anjelica Diffendal (sophomore) and Mackenzie Krasowski (freshman) are two players who stepped up during the preseason game where they combined for 5 points.

RMU is prepared to win this weekend with Lauren Bailey between the pipes. Bailey will need to fend off the Saints offensive attack and fast-paced offense to keep the Colonials’ home opener win streak alive. However, there is no questioning the defensive skill the Saints possess that compliment their goaltender tandem of Sonjia Shelly and Grace Harrison. Whoever plays in goal for the Saints has the potential to steal a game from the Colonials this weekend.

[email protected] opens the regular season against nationally ranked St. Lawrence this weekend. Here’s a look at each team’s 2017-18 stats to see how they match up with the Colonials holding an advantage in most categories. pic.twitter.com/fxU9rFyNT2