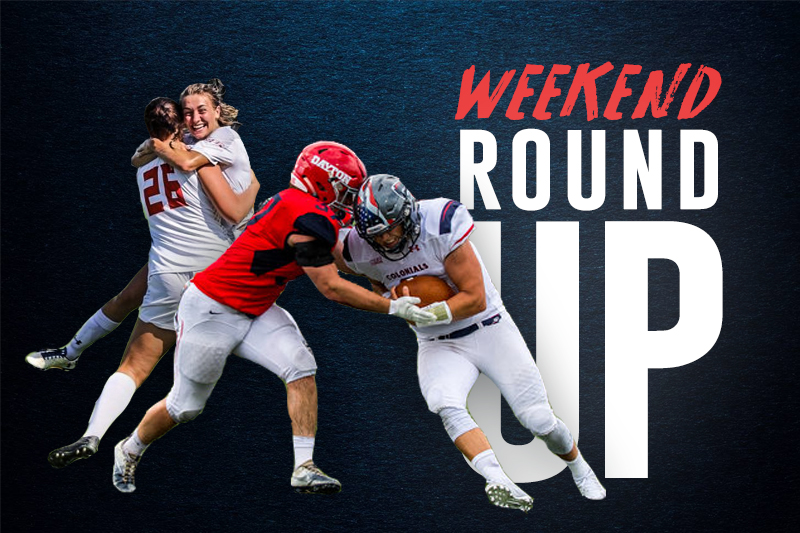 Here is a quick round-up of all the games that RMU Sentry Media couldn’t get a reporter to.
Aug. 24, 2018
RMU men’s soccer (0-1-0) 0 vs Canisius (1-0-0) 3
This game marked the start of the season for the Colonials, but unfortunately, they did not get off to the best of starts. Through the first 15 minutes of the game two RMU players had entered the referee’s book on yellow cards. Then at the 20:45 mark, the Canisius Golden Griffins broke the scoreless tie with a corner kick that was able to find the foot of Canisius’ Alessio Atzori. It wouldn’t take much longer for the Golden Griffins to double their lead as Troy Brady beat Colonial goalkeeper Winter Fondi to make the score 2-0 at the 24:04 mark. In the second half, the Colonials Matt Cillo was sent off for yellow card accumulation after being dealt his second card. With the Colonials down to 10 men, any hopes for a comeback were made even more complicated, but those hopes were squashed when Troy Brady scored his second goal of the afternoon off of a penalty kick making the score 3-0.
RMU volleyball (0-1) 0 @ Western Carolina (1-0) 3
The Colonials kicked off their season against Western Carolina at the Catamount Volleyball Classic in Cullowhee, North Carolina. RMU however, would fall short of victory as they were swept three sets to none. Despite the fact that the Colonials were swept on Friday, one bright spot is that all of the sets were fairly close. As they ended 25-23, 25-19 and 25-21 respectively. Another bright spot for the Colonials was Maria Alfano, who led the team with 10 kills.
RMU women’s soccer (1-2-0) 0 @ Canisius (2-0-0) 1
The Robert Morris women’s soccer team dropped their second consecutive game on Friday as they fell to the Canisius Golden Griffins 1-0. The lone goal of this contest was scored right before halftime as senior Melanie Linsmair beat Colonials goalkeeper Sydney Bruckner.
Aug. 25, 2018
RMU volleyball (0-2) 1 vs Middle Tennessee 3
The Colonials dropped their second game of the Catamount Volleyball Classic at the hands of the Middle Tennessee Blue Raiders. Once again it was another close affair that the Colonials fell short in. RMU came out and won the first set 25-20, but would go on to fall in each of the next three sets, 25-22. 25-20 and 25-19.
RMU volleyball (0-3) 0 vs Charleston Southern 3
In their second game of the day the Colonials were defeated yet again, and for the second time in the tournament RMU was swept. A positive for the Colonials is that they were able to amass more blocks than their opponents as they led that category 6-4.
Aug. 26, 2018
RMU women’s soccer (1-3-0) 2 @ Niagara (2-1-0) 3
The RMU Women’s soccer team fell at the hands of the Niagra Purple Eagles 3-2 today in heartbreaking fashion. The Purple Eagles jumped out to a 2-0 lead, but Jane Schleicher would score a brace in the second half to bring the game back to even. However, the Colonials comeback would fall short when Alexis Horwedel would score at the 94:16 mark to put Niagara up once and for all at 3-2.
RMU men’s Soccer (0-1-1) 0 @ St. Bonaventure (0-1-1) 0
The second game of the Colonials season was close but once again, the RMU offense could not find their way onto the scoreboard. Fondi was able to make six saves on the afternoon for the Colonials, but the Colonials offense was only able to make St. Bonaventure goalkeeper Luke Iacobellis four saves on the afternoon.