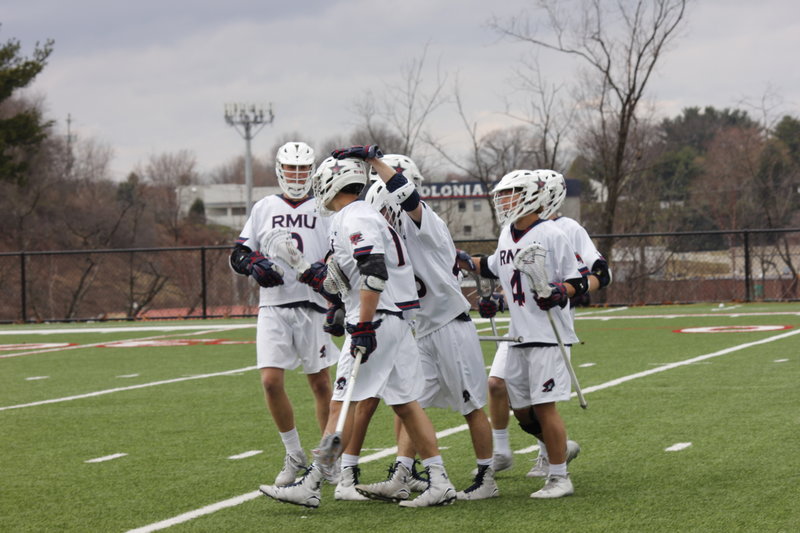 The Robert Morris University men’s lacrosse team is now on a three-game winning streak after defeating the University of Detroit-Mercy Titans, 15-6, on Saturday afternoon.

RMU (3-1) was fueled by hat-tricks from both sophomore attacker Matt Schmidt and freshman attacker Ryan Smith.

“It was good just to get out onto the field and make the most of my opportunities,” Smith said. “It was a good feeling to put the ball into the back of the net.”

RMU head coach Andrew McMinn said that he is impressed with Smith’s contributions as a freshman.

“With Ryan being a freshman, for him to step up and produce at that type of level just speaks to his preparation,” McMinn said. “Being somebody waiting for opportunities on the sideline as a non-starter, it’s a testament to him being ready for the opportunity given to him.”

After Detroit scored the first goal of the game with 11:29 left in the first quarter, RMU scored nine unanswered goals over the course of both halves. Smith concluded this run with his hat-trick goal to give RMU a 9-1 lead with 10:26 left in the third quarter.

Schmidt scored his hat-trick goal with 9:05 left in the fourth quarter to give RMU a 10-4 lead.

Schmidt said the team is playing at a high level.

“We were just flying, all of us,” Schmidt said. “It was definitely a team effort. We don’t rely on just one person. And it goes to show we have guys from freshmen to seniors putting the ball in the back of the net. It’s awesome to have that camaraderie as a team and be able to come out with all your friends and do what you love.”

McMinn said he was pleased with the contributions of all the players.

“Every single person on our roster got onto the field today and contributed,” McMinn said. “The biggest thing throughout the season is that there is very little separation from one guy to the next. And we’re continuing to see that on game days.”

Attackers Tyson Gibson and Adrian Torok-Orban each added two goals Saturday. Torok-Orban leads the team with 10 goals on the season.

McMinn said that Detroit often double-teamed Torok-Orban, and that Torok-Orban did a good job of not forcing anything by simply distributing the ball to his teammates.

“We recognized it in the first half, and Adrian did a tremendous job just getting the ball out of his stick before they actually got the double-teams on him,” McMinn said. “It’s something that we’ve talked about to him a lot. He draws a lot of attention, for obvious reasons. He produces at a high level, he’s a big body and he’s hard to stop.”

When asked what message he will have for his team moving forward, McMinn said, “Our biggest thing is just making sure that we stay consistent. We try to make sure that wins and losses don’t really impact how we move forward. We’ve got to keep our attention toward the things that are going to make us better moving into next week.”

RMU plays its next game on the road against High Point on Sunday, March 5 at 4 p.m. Its next home game is on Saturday, March 11 against Marquette at 1 p.m.