RMU wins on senior weekend for the first time since 2015 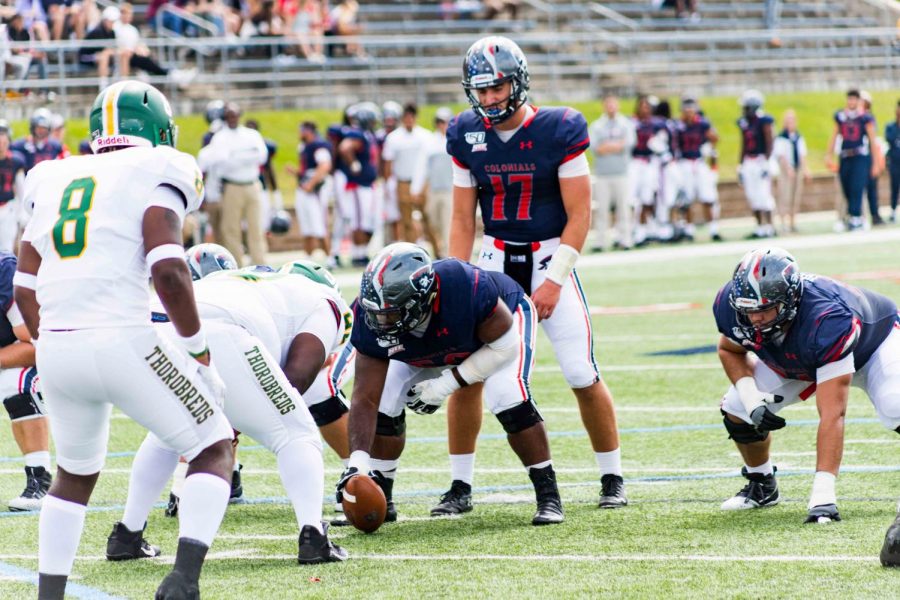 Before the game, Robert Morris celebrated all the seniors. Head coach Bernard Clark shared his admiration for this senior class.

“I feel like I love all these guys,” said Clark. “They all reciprocate that love to me. When I first started the job, the thing that was the most important was football being a process. A process to develop better men, better husbands and better fathers. Hopefully, I’ve given them a little nugget here or there that helps them grow as men, husbands and fathers.”

The game began with the teams trading three and outs. Sacred Heart would break the tie on their second possession of the game. Sacred Heart’s quarterback, redshirt freshman Marquez McCray, set up his Pioneers with a 15-yard run. A few plays later, Julius Chestnut, the NEC’s leading rusher, finished the drive with a nine-yard touchdown run. SHU took a 7-0 lead.

On the ensuing Robert Morris drive, the Colonials got the ball down to Sacred Heart 20-yard line. RMU’s sophomore quarterback, George Martin, would be sacked on third down. This set up a short punt by George Sounders III.

After a SHU punt, the Colonials wasted no time getting back the SHU touchdown. Martin would find Garrett Houser for a 79-yard touchdown pass. After a Nick Bisceglia extra point, the score was tied at 7-7.

Sacred Heart forced the ball down to the Robert Morris 26-yard line. This was due in part to a couple of great plays by Marquez McCray. McCray went for a 23-yard rush. He followed that up, three plays later, with a 10-yard pass to Kezio Snelling. This play turned a 2nd and 14 into a 3rd and 4. McCray would lose three yards on third down. The Pioneers would go for it on fourth down from the Colonials’ 36-yard line. McCray would be sacked to end the drive.

RMU would punt on the next drive. Sacred Heart would get the ball back with 7:23 remaining in the first half.

Sacred Heart took most of that time to drive the field. The Pioneers would go of a field goal with eight seconds to go in the first half. The field goal would be tipped at the line by Chris Stanford, a senior defensive lineman.

The scoreboard read 7-7 when the teams left the field for halftime.

Robert Morris received the second half kick-off. Martin would throw the ball twice on the drive. His first pass found Matthew Gonzalez, a senior tight end, for 11 yards and a first down. The Colonials would go to the air two plays later, but the ball was caught by SHU’s Salaam Horne.

Sacred Heart would waste the extra possession when they punted after three plays.

Robert Morris took a 10-7 lead following a 28-yard field goal off Bisceglia’s right foot. The short kick was set up by a 41-yard leaping catch by Tim Vecchio, a senior wide receiver. Vecchio climbed the ladder and fought for the ball on his way down.

Sacred Heart would take the lead for the second time in the game on the next drive. Tyrese Chambers took a McCray pass 16 yards to the house. Dane Borges tacked on the extra point, putting the Pioneers ahead 14-10.

After a targeting call and an unsportsmanlike penalty on SHU’s Kevin Peprah, the Colonials were given good field position and an opportunity to score.

Alijah Jackson carried the Colonials down to the Pioneers’ six-yard line. This would result in a Robert Morris field goal, making the score 14-13.

Then Nick Bisceglia did it again. He kicked a beautiful onside kick that was recovered by Erik Sherkel.

“Special teams is huge for us,” said Clark. “When I was in college, Coach Jimmy Johnson always reminded us of the three phases of the game, offense, defense and the kicking game, and we have to take it seriously. We hired an unbelievable special teams coach in Jake Bronowski. He does a great job with these guys. These guys are excited about kickoffs and special teams. The great thing about that play, (Bronowski) came to me and said ‘it’s there should I go ahead and do it’ and I said, ‘absolutely if it’s there go ahead and do it,’ because he studies film.”

The Colonials would ride the momentum off of that play to score again and take the lead. Bisceglia once again knocked the ball through the uprights and Robert Morris led 16-14.

Sacred Heart would not go down easy. The Pioneers were driving with time running out. SHU called a timeout with three seconds left in the game. Borges trotted onto the field to kick a walk-off 39-yard field goal.

“We just gotta make one stop,” said Clark. “We put them in a position that it was going to be tough for their field goal kicker to make it. And that’s what we did.”

Borges putt a charge into the ball but pushed it just left, giving Robert Morris the 16-14 win. This was the first win on senior weekend for RMU since 2015.