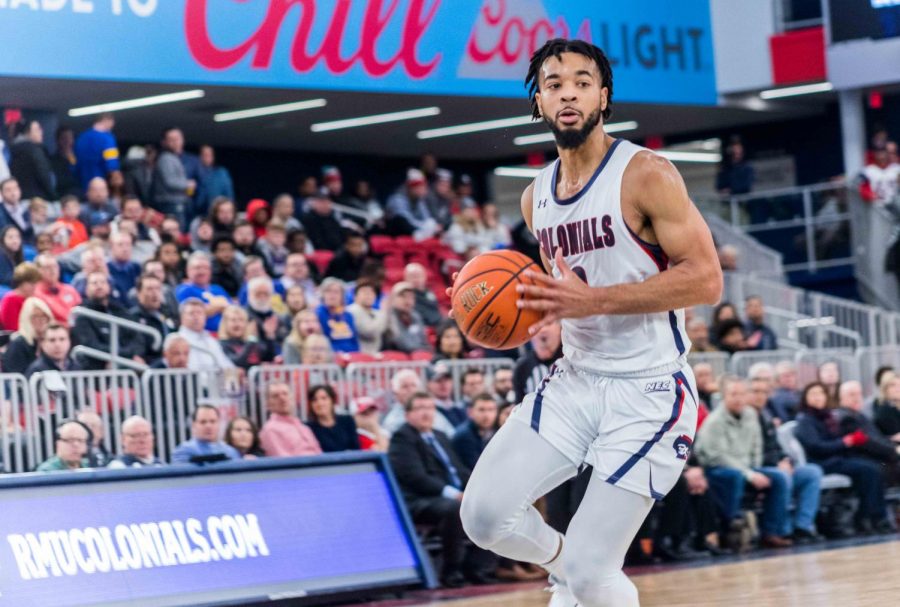 MOON TOWNSHIP– In their third game of conference play, the Robert Morris University men’s basketball team (7-9, 3-0 NEC) faced St. Francis Brooklyn (7-7, 1-1 NEC) on Thursday evening. The Colonials led the game from start to finish, ending with a decisive victory over the Terriers, 78-52.

Redshirt senior Josh Williams opened the game for the Colonials, taking the ball down the court for an easy lay-up. He immediately followed this with back-to-back three-pointers, which resulted in a timeout call from St. Francis Brooklyn.

After the timeout, the Terriers attempted to play catch-up for the rest of the game. Multiple lay-ups from Charles Bain and dunks from AJ Bramah kept the Colonials firmly in the lead.

Scoring came fast for the Colonials as they capitalized on fast ball-handling and passing to increase the gap. Dante Treacy hit a buzzer-beating three-point shot which was followed by a turnover by the Terriers that Yannis Mendy took in for a lay-up.

Josh Williams came in again for another three-pointer for the Colonials. It was Bramah’s rim grabbing dunk, however, that brought the score up to 26-16.

Moments later, Josh Williams was back at it again, assisting Mendy’s lay-up while playing off his knees on the court after being tripped up by an opponent. Mendy brought it right back for another lay-up.

The first half was closed out by Josh Williams, who hit another three-pointer. Andy Toole’s Colonials were in front 39-30, with RMU’s speed and clean playing maintaining a firm gap between them and the Terriers.

RMU started the second half with the ball, meeting a St. Francis Brooklyn team that was playing cleaner than the first half. Although the Terriers offense was more effective in this half, it was not enough to overcome the Colonials.

The Williams brothers came into the second half with consecutive three-pointers. Jon Williams, the RMU school record holder in consecutive game starts, hit a three-pointer that he followed with an assist to Mendy who went in for a lay-up once again.

Recently subbed in, Sayveon McEwen joined the fast play that defined much of the second half. After missing his lay-up, he was laid out, and the Terriers took the ball down the court only to turn it over.

After, each team committed a turnover on their ensuing possessions.

Charles Bain finally put an end to this play with a lay-up and leaving the score 51-37.

After this, it was all Colonials with multiple lay-ups, dunks and shot from beyond the arc from Bramah, Mendy, Bain and Jalen Hawkins.

The Colonials shut the Terriers down with a massive block by freshman Olisa Ngonadi in the last seconds of the game. RMU took the game, winning their third consecutive conference game.

They were led in scoring by Josh Williams with 20 points, while his brother led the team with five total assists. Overall, the Colonials’ field goal percentage was 54.2% with a free throw percentage of just 41.7%

On Saturday, the Colonials will look for similar results in another conference match-up against Wagner College (4-10, 1-2).