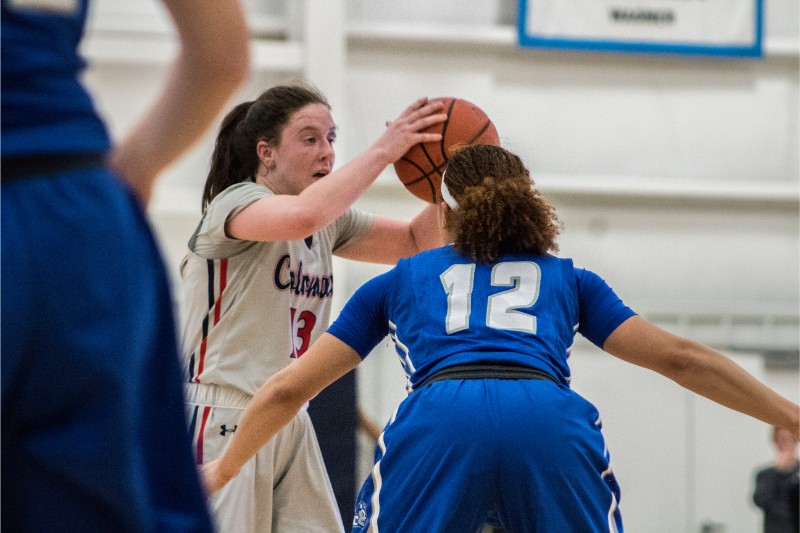 Coming off of a dominate performance against Bryant, the Colonials looked to get extend their winning streak to nine games. RMU (16-4, 9-0) beat Central Connecticut State (2-18, 2-7) 66-47 at the Student Recreational Center at the North Athletic Complex Monday evening.

The signature defense that Robert Morris is known for seemed to be nonexistent in the first half. CCSU scored their first 15 points from downtown. The Blue Devils finished the first quarter shooting 4-7 all from behind the arch.

Towards the end of the first half and early on in the second half, the NEC leading defense showed up. The Colonials forced seven steals and pulled down 30 defensive rebounds. But when the defense started to slip, the one constant for RMU made her presence known. During a timeout with 7:37 left in the game, Megan Smith made sure the entire gym knew that it was time to close the game out. “We got to be better,” Smith exclaimed to her teammates.

Speaking of Megan Smith, it’s easy to say that she left her mark on the game. Smith scored 22 points, one point short of a career high, on 9-10 shooting from the field. Smith also grabbed nine rebounds.

There was another Colonial that had her name all over the score sheet. Nneka Ezeigbo recorded her sixth double-double of the year, finishing with 13 rebounds along with 10 points.

The game seemed closer than what the scoreboard read. The Colonials made crucial shots and forced turnovers at the right time.

The Robert Morris women’s basketball team is back in action Saturday, Feb. 3, at St. Francis (PA).