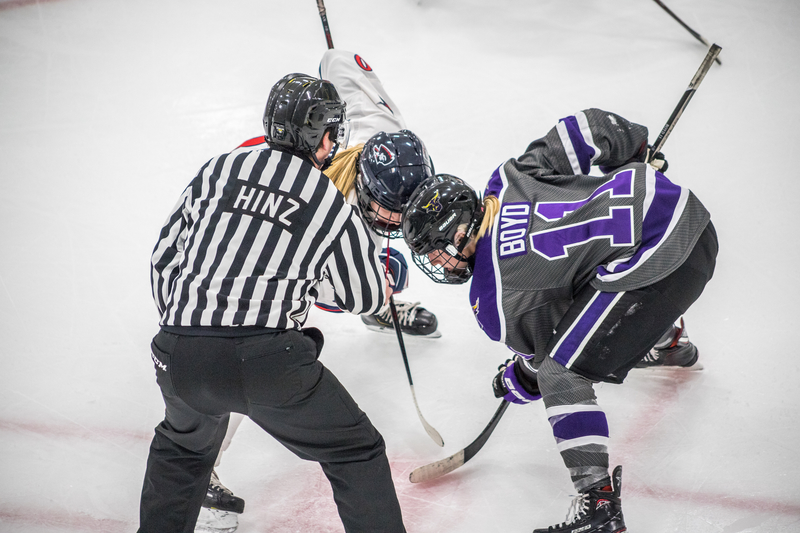 PITTSBURGH— The RMU women’s hockey team (6-7-3, 4-1-1 CHA) closed their series with the Minnesota State Mavericks (5-5-2, 2-5-1 WCHA) with a frustrating loss 2-1 in a 1:05 pm game at home at Colonial Arena. Two third period goals by the Mavericks would be the difference in this one, as RMU dropped a game that could have essentially been won. The team decided to cancel any post-game interviews as a result of this frustrating loss.

Early on in the game, play was very tight as the defensive play for both teams were not allowing many shots on net. Freshman goaltender Arielle DeSmet started this game for the Colonials and was stellar, despite giving up two goals when all said and done. The first period went by quickly as little whistles were blown, keeping both benches on their feet for changes.

The first goal of this contest was scored by none other than Jaycee Gebhard as she simply worked hard and outplayed the Maverick defense, chipping in her tenth goal of the season on a rebound at 9:26 in the second. A strong second period for the Colonials only resulted in one goal though, despite their chances. RMU only went one for seven on power play opportunities, which could be a concern for the team.

The third period then came along and contradicted how the Colonials have been playing so far in the third this season. Instead of having a spectacular third period like they have had all season, the Colonials were not able to build off their one-goal lead and let in two unanswered goals. The first of which, Brittany Fleming scored at 10:28 followed by a weak shot that stumped DeSmet from Rebekah Kolstad by at 16:19.

Despite having the net empty and top scorers such as Welsh and Gebhard on the ice, the Minnesota State Mavericks, led by goaltender Abigail Levy, were able to close out the game with a 2-1 win. This is obviously a tough loss for the Colonials as they could have won these two contests this weekend. This truly shows with the decision for the team to not allow any media interactions after the game, which is a rare occurrence.

Nevertheless, the RMU women’s hockey team will be back in action on Black Friday for a tough matchup against nonconference team Cornell (5-1-2, 4-1 ECAC). The game will start once again start a weekend series at Colonial Arena and both games will be at 3:05 pm.