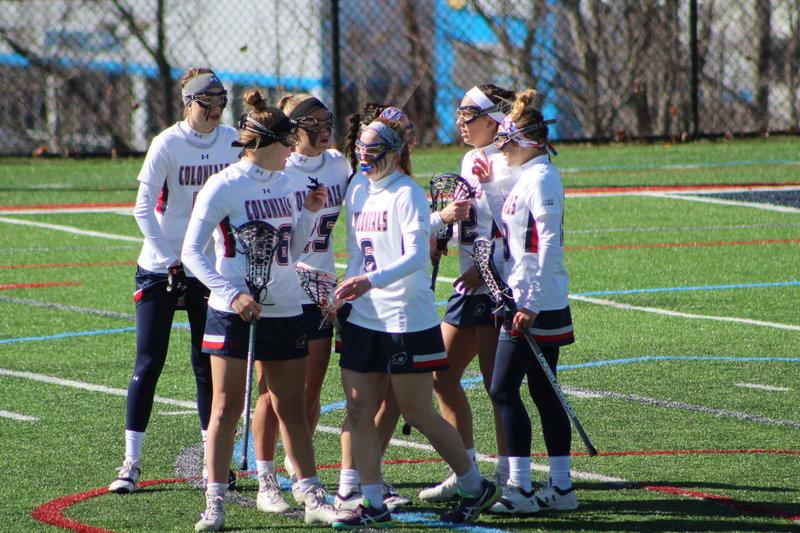 On a cold and windy afternoon at Joe Walton Stadium, the Colonials garnered a 9-7 win over Detriot-Mercy.

Stout defensive play and Robert Morris’ Freshman goalkeeper Katelyn Miller, who was credited with ten saves on the day, dominated the start of the game.

“She is just..knocking it out of the park. You know I think as a freshman you consider, you know you expect a little bit of up and down, and I think she’s had a little bit of that in the preseason, today she really just came out strong,” said head coach Katy Phillips.

After RMU held a firm 1-0 lead after the first ten minutes, Detroit Mercy then notched their only two goals of the first half when Kaitlyn Wandelt and Jessica Snyder both scored to give the Titans a 2-1 lead.

After putting another goal on the scoreboard, the Colonials’ Maggie Stella took a clear down the field and outran three Titan defenders to put one in the back of the net for a 3-2 lead with seven minutes left in half.

The rest of the first half was a defensive battle between the two squads; goalies Miller and Detroit’s Allison McDonough(11 Saves) frequently bailed out their defenses with tough 1-on-1 saves. On one occasion McDonough stuffed Stella on the doorstep and proceeded to be laid out by an RMU attacking player.

The second half brought more goal scoring as the Colonials immediately won the draw and took less than a minute to increase their lead by two. Detroit dominated the game from that perspective by winning 11 of the 17 draws taken. After a Detroit goal, the Robert Morris lead grew to 5-3 when freshman Clio Kerr scored her third goal of the season while being thrown to the ground by three Titan defenders right in front of the crease.

The intense goals kept coming as Detroit attacker Lexie Kinmond used a hesitation dodge to split two RMU defenders and rip one to the back of the net sidearm; trimming the Colonial lead to 5-4. Not even 30 seconds later that lead was gone, as Wandelt acquired her hat trick and sixth goal of the season.

A momentum change was needed for the Colonial women when they had a free position attempt. Unfortunately, a pass from Stella sailed high, intended for an open Sophia Eureka who had a 1-on-1 with the goalie. Luckily for Robert Morris, a few possessions later a beautiful cut by Stella opened up a passing lane where freshman Mackenzie Gandy found Stella for the top shelf goal to take the lead.

With five minutes left in the game, Gandy was given a yellow card and RMU found itself man down with a narrow one point lead. Shortly after the penalty, the Colonials’ Alexis Rusnak forced a turnover and cleared the ball to the offensive side of the field. While one man down, Robert Morris was still able to keep the offense going as Stella ran around a double team to get her hat trick and put RMU up 8-6.

Rusnak followed that goal up with her first goal of the season and Robert Morris had a 9-6 lead with 3:03 left to go in the game.

Detroit was able to salvage one more goal, but the Colonial defense coupled with bad decision-making proved to be too much for the Titans to overcome and Robert Morris took the game 9-7. The Colonials will play next Saturday at George Washington(0-5) at 1 pm. Meanwhile, Detroit Mercy will play their next game at Duquesne(0-2) on Monday the sixth at 12 pm.