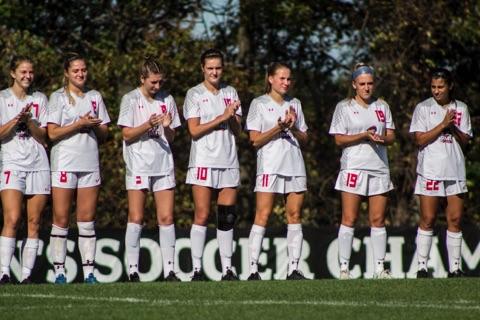 The Robert Morris Colonials (4-11) won a close game against the Fairleigh Dickinson University Knights (6-8-2) 2-1 in the second-to-last home game of the season.

The first half of the game was very limited in action for both sides, as there were only four shots by RMU and five by FDU, ending the half in a 0-0 tie.

The second half started with a goal being scored unassisted from Robert Morris at 53:32 by sophomore midfielder Kristina Kelley, putting up a one-spot in the early part of the second half, leading 1-0.

After the tying goal, RMU and Fairleigh Dickinson ended the half in a 1-1 tie, leading to overtime.

The first overtime period ended with the scored remaining in a 1-1 tie.

The last overtime period started and ended by RMU winning the game 2-1 by junior forward Jane Schleicher six minutes into the period.

Schleicher explained what she did.

“Number 22, Maleha Kureishy, played a great ball across and I just happened to be sprinting across, just wanted to get overtime done with,” said Schleicher.

“Yeah I think so, we are playing better and better with the conference games coming up, every single game we could’ve won, again we didn’t, but today we did,” said Kowalski. “Now I think we can finish out on a strong note and win the next two games.”

Kowalski also discussed what he anticipates to happen in the home finale.

“Well, if we duplicate what we did today, I’m expecting a win,” said Kowalski.

RMU finishes up the home part of their season on Sunday, Oct. 22 against the Mount St. Mary’s University Mountaineers in a Northeast Conference matchup at the North Athletic Complex at 1 p.m.