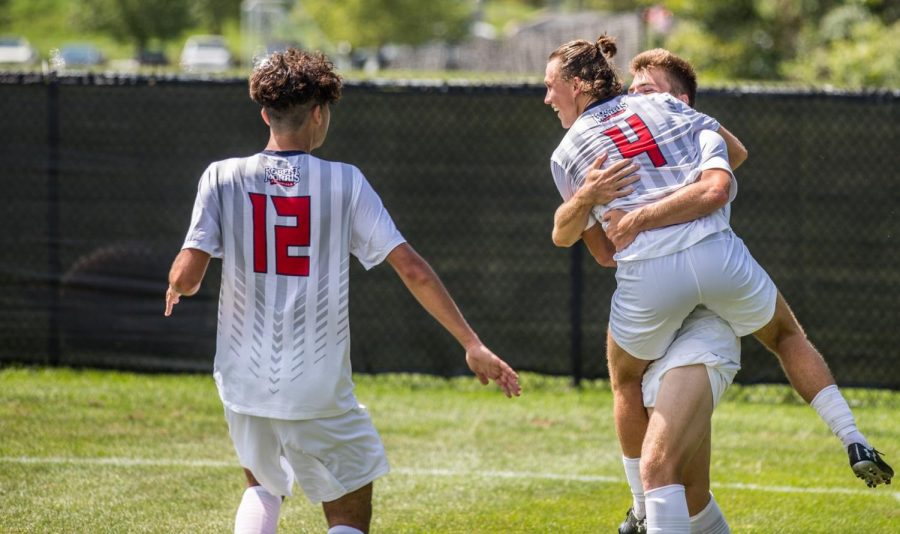 Moon Township, PA. – For the first time in their history, the Robert Morris University men’s soccer team faced off against the Northern Kentucky University Norse this afternoon, losing 3-2 at the North Athletic Complex in the second game of the RMU / Duquesne Tournament.

Robert Morris started the game out strong, with a breakaway chance in the second minute by senior forward Zac Sherman on a pass by Cristian Palermo going just past the post. Northern Kentucky would respond with what seemed like a goal 44 seconds later, however, it would be called back on an offside call by the assistant referee.

At the 8:16 mark in the first half, after some strong pressure at near the Northern Kentucky goal, Onando Collins took a shot from outside the box, NKU goaltender Jim Barkei had to stretch out for. At the 13th minute in the game, Colonial senior Owen Pearce was given a yellow card.

The Colonials would strike first in the game when in the 29th minute, NKU’s Jim Barkei came out to pressure Zac Sherman, and he let a shot go from near the midfield line, over Barkei’s head, for Sherman, and RMU’s first goals of the season.

NKU would respond in the 32nd minute, when a corner from Conner Probert found the head of Alex Willis, and beat Snatchko to tie up the game.

At the start of the second half, RMU would put a lot of pressure on the Northern Kentucky net, including a cross that was headed away by Calvin Murphy in the 46th minute, however, Murphy would score for the Norse almost 4 minutes later, after a free kick by NKU caused a scrum in front of the net, and Murphy would tuck it home for a 2-1 Northern Kentucky lead.

NKU would add to their lead in the 55th minute, after shot by Alex Willis on a cross by Conner Probert was saved by Snatchko, the rebound was pounded in by Alex Grieve to make it 3-1 Norse.

The Colonials would put heavy pressure on the Northern Kentucky net, including shots by Zac Sherman in the 82nd minute and Owen Pearce in the 84th minute that both barely missed the far post.

RMU would come to within one goal in the 87th, when Roald Aas Ravlum passed the ball to Zac Sherman, who lofted a shot past the charging NKU keeper.

For the final couple of minutes, NKU kept the ball down in the corner, and prevented RMU from trying to tie it up.

When asked about how he felt scoring the first and second goals for the team this season, Zac Sherman said “It feels great, obviously it’s a lot of emotion for the first one, for the team, but at the end of the day, it doesn’t mean much when we can’t get the win; but it’s definitely going to help us going forward, now that we have scored two goals, we know that we can”.

Head coach Bill Denniston said that his team was “Doing better, we’re scoring a couple goals, we’re still missing a couple key guys that should be hopefully back soon, and I think that’ll help greatly. We’ve been playing well, outshot by 2 the whole year, and then 4, so we’ve been playing well, just haven’t been scoring the goals”. And when asked about Christian Snatchko’s performance, Coach Denniston said, “Snatch did a good job, he hasn’t played in a while”.

The Colonials travel to Farmville, VA. next week for a clash against the Longwood Lancers at 3:00pm.