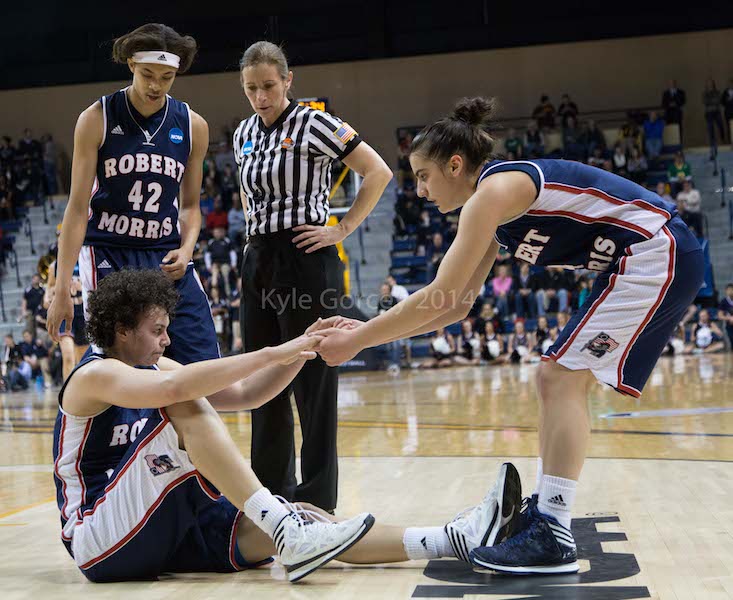 After Artemis Spanou exited Saturday afternoon’s NCAA first-round Tournament contest against Notre Dame with 52 seconds left, Sal Buscaglia took a moment to embrace the forward before she took a seat on the bench.

While Spanou, Robert Morris basketball’s all-time leading scorer, walked off the court the final time as a Colonial, Britta Emberg trotted onto the floor for the fifth and final time this season.

Though it wasn’t quite the sendoff that Buscaglia had hoped to give seniors Spanou, Emberg, Kelly Hartwell, and Jolie Olingende, he is proud to have been their coach.

“Coaching is a special thing. Not because you win games or get publicity, certainly I’m not a household name. It’s not about that, it’s about having relationships with young ladies and helping them grow and mature as people,” said Buscaglia, who was fighting back tears during the post-game press conference.

“When you know that three of them aren’t going to be there anymore, you get a little sad,” he added. “All these people on my team, years to come, they won’t win a national title, but Kelly Hartwell, she’ll be a principal somewhere, Artemis Spanou will play professionally and then be a CEO of a company, Britta Emberg will be something very special, and that’s when I put a smile on my face.”

Falling to No. 1 seed Notre Dame by 51 points wasn’t the ideal situation for Spanou to end her illustrious career as a Colonial, but just the fact that the Rhodes, Greece native received an opportunity to compete against one of the best programs in the country was rewarding in itself.

“These four years have been wonderful for me and finishing my senior year, winning the conference and coming to the NCAA for the first time, it’s a great experience,” she said. “I’m just going to remember the people I played with, my coaches, and all these experiences that we’ve had together.”

In the fall of 2010, when Spanou, Emberg, and Hartwell first arrived in Moon Township, RMU was two years removed from an NCAA Tournament berth, but it took four seasons, including a seven win junior campaign, for the three to be able to capture a Northeast Conference title.

Playing for a mid-major program isn’t a glamorous life. Oftentimes the hectic schedules make it difficult for players to balance academics and athletics, but it’s something that Buscaglia’s bunch has managed to do this season.

And they did it well.

“Did you ever go grab a bus for 10 hours and then have an exam at 11 o’clock in the morning after being on the bus all night and get A’s? That’s what they do,” he continued. “That’s what type of quality people I have and I wouldn’t replace one of those 12 with anybody in the country.”