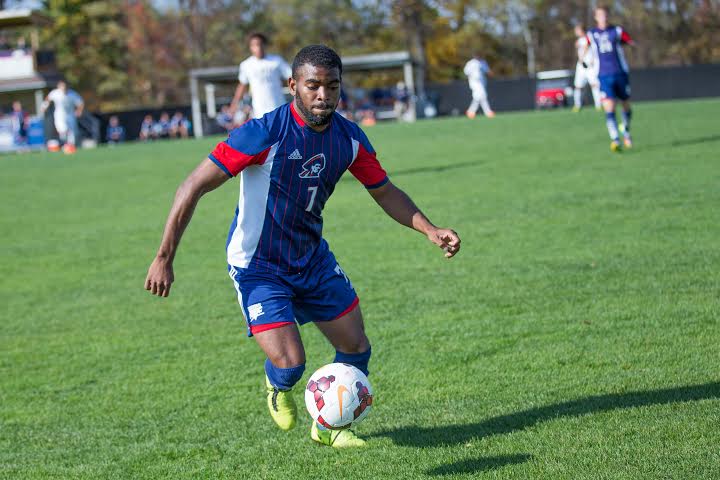 On a cold and rainy Halloween day at the North Athletic Complex, the Robert Morris men’s soccer team (7-8-2, 2-3-1 NEC) defeated Central Connecticut State (5-8-2, 1-3-1 NEC) Friday afternoon. The Colonials finessed their way past CCSU with a complete team effort to win 2-0.

“It was the best team performance since I’ve been here,” said junior Neco Brett, who scored his 15th goal of the season on the day.

Robert Morris came out very intense and aggressive to the ball. Bruce Cullen and Speedy Williams both fired several shots on goal, including a near miss off the top post from Williams.

Despite the opportunities, they couldn’t score a single goal in the first half. The Colonials kept up the aggression and the referees took notice. Cullen was issued a yellow card in the early minutes of the second half.

In the 69th minute, Brett scored on a one touch shot off a cross from freshman Corey McCurdy. The Colonials outshot Central Connecticut 14-2 in the match.

“Corey worked really hard to win the ball and put it across,” said Brett. “Before the ball got to me, I looked at it in the air, knew where the goal was, and put it in.”

In the 83rd minute, Williams found Carl Reid who beat the CCSU goalie to add on the Colonials’ lead. Goaltender Brenden Alfery recorded the shutout with four saves. The junior is second in the nation with 93 saves this season.

“I keep just keep talking to my defense, staying on cue with my defenders so that they’re on the same page as I am, and keep them motivated as well,” said Alfery. “We played really well. We were passing the ball very well. We were making the right runs. We just dominated from the first minute to the last.”

Robert Morris ends the regular season next Sunday when they welcome St. Francis (PA) at the North Athletic Complex for a 1 p.m. match.