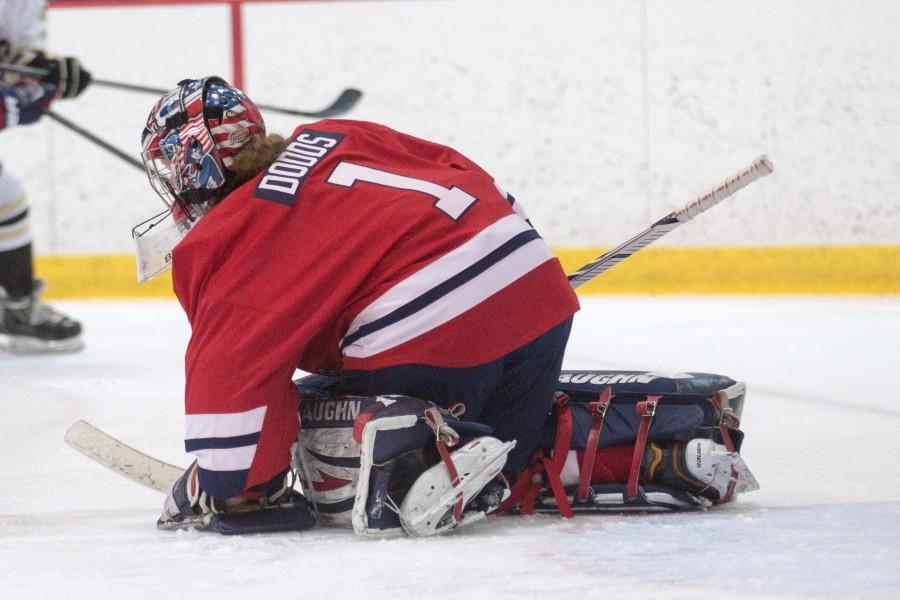 The Robert Morris University Colonials notched their first win of the season at their home opener against the Merrimack Warriors, rising to a record of 1-3-1 overall.

Coming off two disappointing away losses to Colgate University, Robert Morris was itching to get back on home ice to prove their power and skill. In the familiar atmosphere of 84 Lumber Arena, RMU had an explosive start in the first period. Sophomore Brittany Howard started the scoring spree with an even-strength goal (1:57), followed by junior Rikki Meilleur on the powerplay (5:43). The powerplay was a result of a body checking penalty by Merrimack’s Dominique Kremer.

Sophomore Amanda Pantaleo also cashed in on the powerplay (9:51), with the Warriors’ Felila Manu in the box for hooking. Senior Anissa Gamble finished the rally with an even strength goal (11:19).

These were Pantaleo and Gamble’s first goals of the season. “It’s really exciting,” Gamble, a defenseman, said, “I don’t score much, but when I do I get really excited.”

Robert Morris was able to kill off two penalties; the first was awarded to freshman Sarah Quaranta for checking (15:25), and the second to senior Leah Carlson for roughing (17:44).

Coming back after the first intermission, the crowd saw a resurgence from the Warriors. Aggression and desire were apparent in their actions. Netminder Jessica Dodds held Merrimack’s speed and drive at bay, though, stopping all nine shots thrown her way during the period.

In the offensive end, RMU continued to dominate. Though Merrimack’s defense had upped their game from the first period, the Colonials found ways to stick-handle and pass their way to the net. Howard came up big for Robert Morris yet again with an even strength goal, her second of the night.

Freshman forward Caitlyn Sadowy suffered a two-minute hooking penalty at 10:12 in the second period. Though Merrimack had many good scoring opportunities, RMU’s penalty kill unit shut down any major threats.

In turn, Robert Morris was awarded two powerplays due to a penalties to Merrimack’s Paige Voight for tripping (12:13) and Dominique Kremer for hooking (15:23). However, RMU could not capitalize on either one.

Seven minutes later (17:25), it was freshman Amber Rennie who was finally able to get the puck past netminder Samantha Ridgewell. Rennie put herself on the board for the night as she tallied an even strength goal for the Colonials.

The third period brought even more grit from Merrimack University. Beatrice Dufour scored the Warriors’ first goal of the night at even strength (3:49).

Dodds was unable to locate the puck through the heavy traffic in the crease, allowing the Colonials only goal against of the night. She stopped an impressive 26-of-27 shots.

With a final push led by Howard in the last minutes of the game, Robert Morris maintained possession of the puck in the offensive zone. Though the Colonials looked fierce, they did not score.

RMU ended the night capitalizing on 2-of-4 power play opportunities and 6-of-33 shots on net. The team was thrilled to have their first victory of the season be on home ice.

“Any win is exciting, obviously. You get the first one of the season, and to get it at home, sometimes it’s just a little extra special,” said head coach Paul Colonitino, “They’ve worked hard and I think just getting that first win under the belt is pretty good for them.”

Coming off those hard losses last weekend made the victory even sweeter. “Our team has shown lots of progress from last weekend, which is really exciting,” Howard said. “We played strong as a team. We played well together. There was no individual play, it was all team related.”

The team is looking forward to their rematch against Merrimack when they return to the ice Saturday, Oct. 10 at 3 p.m. at 84 Lumber Arena. “We’re going to come out with the same intensity, or if not, amp it up another level,” Gamble said of their game plan going into match up.

Looking ahead, the Colonials will travel to Troy, N.Y., to take on the RPI Red Hawks on Oct. 16 and 17, respectively.