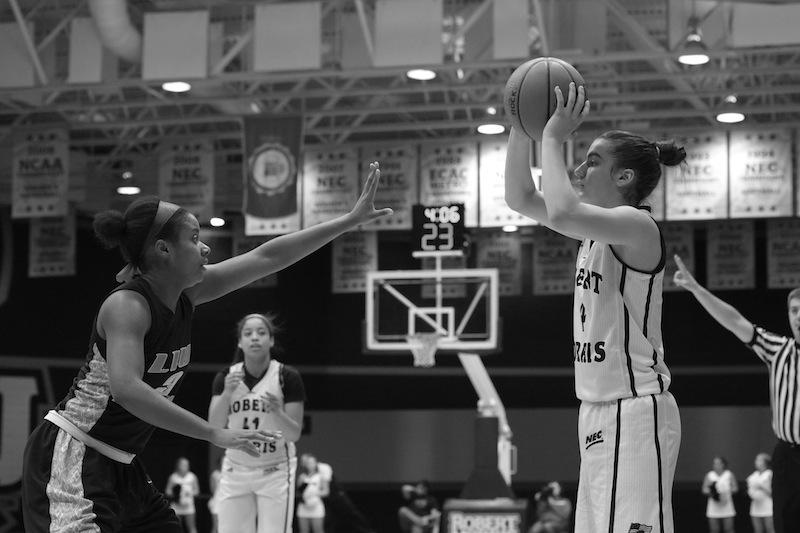 For the Robert Morris women’s basketball team as of late, there’s no place like home.

The Colonials spent Monday evening dominating LIU Brooklyn at the Charles L. Sewall Center, pounding the Blackbirds 79-43 to improve to 12-2 in the NEC and extend their home winning-streak to nine. The 36-point margin was the second largest in the RMU-LIU Brooklyn series, and sent a message the rest of the conference that the first-place Colonials aren’t exactly coasting to the postseason.

“We worked really hard today on the defensive end holding them to a low shooting percentage and kept them off the offensive glass,” said associate head coach Charlie Buscaglia. “We worked hard and our shooting was an aberration of our work ethic.”

The team shot 50 percent from the floor (27-of-54), and four of five starters scored in double figures. Buscaglia explained the importance of having a legitimate scoring threat from all five positions on the floor.

“It’s a big help, especially when teams try to stop Spanou,” he said. “They try to use one player to go and double her and leave somebody open. As long as we have that mindset that we’re going to hit that open shot. We’re going to take that open shot and take it personal.”

“We came out strong and wanted the win,” said Spanou. “We got a challenge from Coach Sal that he wanted to see energy and intensity from the first minute. That’s what we did. We came out focused and played hard from minute one to minute 40.”

“We needed to come together and actually deserve this win,” said Oursler. “I think we did that.”

Spanou explained how beneficial Oursler’s presence is down low, especially when she needs to pass out of a double, and sometimes triple-team.

“This year, I have a lot of players I can trust like Cassie,” said Spanou with a laugh. “She’s always in the right place at the right time. When I pass her the ball and she makes it, I get the assist and she gets two points, everybody’s happy.”

Robert Morris looks next to a four-game road swing, with a trip to Rhode Island on February 22nd to take on Bryant first on the docket. Tip-off for that game is set for 1PM.