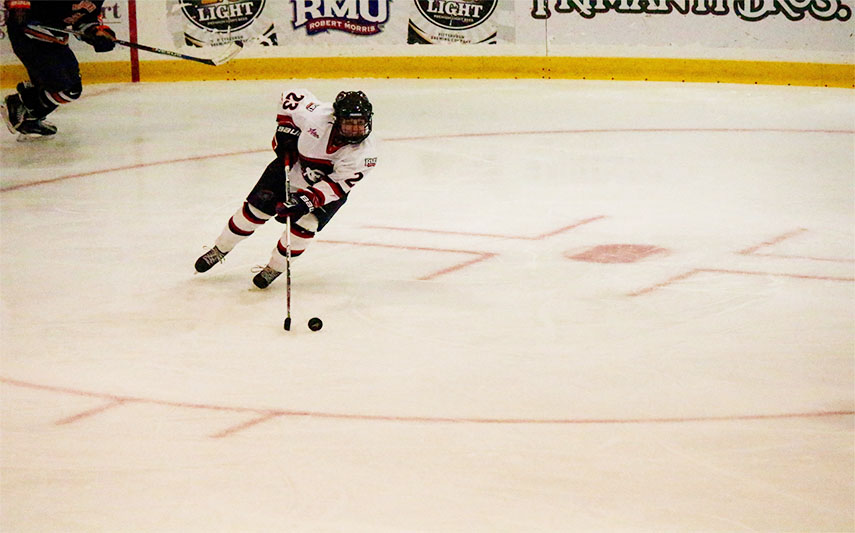 The Robert Morris University Women’s Hockey team finished off the weekend sweep of the Lindenwood Lions in dramatic fashion with an overtime goal by Amanda Pantaleo, giving the Colonials the 3-­2 OT victory.

After jumping to a quick two goals to zero lead at the end of the first period, taking advantage of two power play opportunities. But then RMU’s offense seemed to stall, tallying only eight shots to Lindenwood’s twenty-one in the second period, allowing the Lions to tie up the score 2­-2.

That score would remain, as neither team was able to take advantage of their power play opportunities, and the game entered overtime.

Once the extra period of hockey began, it did not take long for Robert Morris to put this game in the books, with Pantaleo’s goal coming only 1:36 into overtime, giving RMU their 14th win of the season, putting them at 14­-9-­5 and 6­-4-­4 in the CHA.

Robert Morris was able to show their depth, with their nine points being split between 9 players, as each line was able to have some effect in the game.

Mikayla Lowater added her 11th goal of the season, while Maeve Garvey scored her 7th. With six games left, including two games with conference leader Mercyhurst and two against Syracuse, who is second in the CHA.

Wins against these two teams will propel the Colonials to a conference title, and a hopeful NCAA tournament berth to follow.