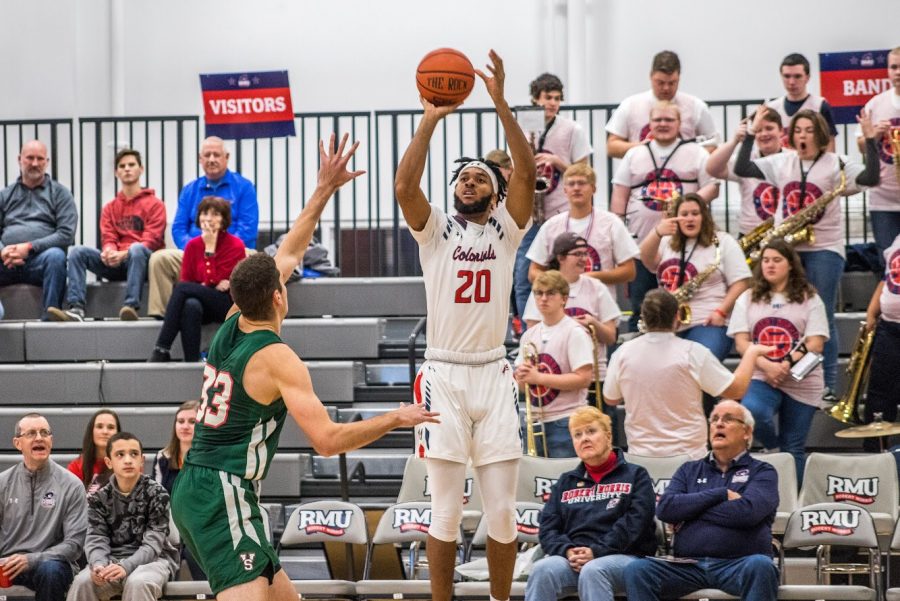 “Rebounding, taking care of the ball and defending. Those are our keys,” explained freshman guard Cameron Wilbon, “We do that for 40 minutes, we’ll win the game.” The Colonials would need every key they had as this game got close down the stretch.

The Colonials started this game by controlling the offensive glass. Four offensive rebounds helped Robert Morris get an 13-8 lead in the first half.

Senior guard Matty McConnell started the scoring with back-to-back three-pointers. Sophomore forward Chris Coalmon, added another three for the Colonials. Robert Morris took a quick 9-6 lead. The two conference foes then traded baskets. A layup by Malik Jefferson brought the Mountaineers within three points. The 15-12 score is the closest it would be for the remainder of the first half.

The Colonials were in a little foul trouble early. Robert Morris head coach Andy Toole explained his comfort level going to the bench.

“It depends on the day in all honesty,” outlined Coach Toole, “Sometimes we go the the bench early because the comfort level of the starters depends on the day at times. I thought Charles Bain was excellent the other night, and today I thought he was a step slow. We got to continue to have some of these bench guys come off and give us some positive production.”

The Robert Morris bench outscored the Mount St. Mary bench 15-0 in the first half. At the end of the game, RMU’s bench contibuted with 26 points. MSM’s depth was only good for five points.

Yannis Mendy and Malik Petteway pulled down four offensive rebounds a-piece. Thanks to Mendy and Petteway, RMU scored 11 second chance points. Robert Morris’s bench was up early and often. Early foul trouble forced head coach Andy Toole to go to his bench. The bench scoring was lead by Cameron Wilbon and Malik Petteway. They combined for 10 of the RMU bench’s 15 points. All of this would help the Colonials go on a 15-7 run to end the half. The halftime score read 30-19 in favor of RMU.

With 9:24 left to go in the game, the score was 45-43. A foul by Chris Coalmon sent MSM’s Collin Nnamene to the free throw line. Nnamene would make both free throws. The once 11 point lead for the Colonials went away.

The Colonials went up by five and made the score 50-45. Mount St. Mary’s then came back and made it a five point lead. A steal and score led to the Mounts first lead of the day. The score was 51-50.

Josh Williams explained the importance of a team keeping their composure under fire.

“The main thing was just sticking to our formula,” explained Williams, “We knew that they were a team that came back from deficits, so we knew that they were going to fight. When they took the lead, it was stick to what we do and stick to what we know. Obviously we struggled with that when they went on their run and took the lead. Once they took it, we kinda gathered together and tried to calm each other down. Just do what we do.”

Josh Williams made a free throw to tie the game. Vado Morse, a freshman guard, took over and led Mount St. Mary’s to a 57-53 lead. After another Malik Petteway offensive rebound, he went up strong and drew the foul and made the basket. Petteway picked up the other end of the and-one. The score was tightened to 57-56.

A made free throw from Mount St. Mary’s Omar Habwe gave MSM a slim 58-56 lead. Malik Petteway was then fouled yet again. He would go to the line and knock down both free throws. The lead was gone and the game was still hanged in the balance. Malik Petteway fouled out with 1:02 remaining in the game. Vado Morse went to the line. Morse missed his first, but he made the second. The Mount took another one point lead, 59-58.

“The Mount dicated the entire tempo of the second half on both ends of the floor,” detailed Coach Toole, “I didn’t think we did a good job on continuing to maintain our effort starting in the last couple minutes of the first half and maintaining all the way through the second half. They just really attacked us with dribble penetration and ball screen action.”

Josh Williams drove the lane and made a layup. Colonials would reclaim the lead 60-59. Williams picked up a long rebound and was immediately fouled.With 1.3 seconds, Williams made both free throws.

After a string of timeouts, in a last ditch effort, MSM threw a long ball to Omar Habwe. His turnaround three pointer missed and the Colonials stay perfect in conference.

The Colonials had a stat filling night. Malik Petteway had his third double-double of the season. Petteway finished with 11 points, 10 rebounds and two steals.

“After we played Missouri State we kinda talked to him and said ‘You’re not doing enough.’,” Coach Toole about Malik Petteway, “He said, ‘I’m doing what you asked me to do.’ I said ‘Here’s the new thing we want you to do is double-double.’ I thinks he really responded will to that. We’re trying to figure out ways to get him the ball as much as we can.”

Yannis Mendy tallied up five points to complement his 12 rebounds. Matty McConnell scored 11 points and snagged eight rebounds for the Colonials. Josh Williams added 11 points of his own. Cameron Wilbon came off the bench and pitched in 10 points and seven rebounds.

As a team Robert Morris pulled down 45 rebounds. That is the second most for the Colonials this year. 18 of those rebounds came on the offensive side off the ball. That is the most by this Colonials team this season.

“We focus a lot on that at practice,” Wilbon on the team’s rebounding, “It’s one of the things Coach Toole emphasises a lot. It’s one of the main things we focus on. A key that we have to have in order to win a game. Me personally, I just love to crash the glass. I know I can give my team extra possessions; give myself extra possessions. I always crash hard on offense and defense.”

The Colonials will travel to New York to take on St. Francis Brooklyn. That game is Thursday, June 10. Tip off is set for 9:00 p.m.